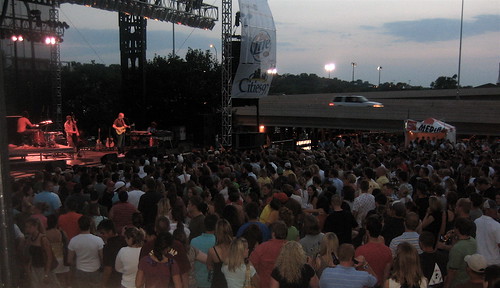 Much to everyone’s dismay Mike Doughty did not make sweet sweet love to me on Friday night. However he did bring the rock to me and probably 1000s of my closest friends at the Basilica Block Party.

I must admit after hearing the dire weather predictions (90 degress and tons of humidity, turning Minneapolis into a giant armpit), I was more than a little worried that the show would suck. But I was wrong and I feel like I need to do a few Our Fathers for doubting the Doughty.

It was an utterly gorgeous, breezy night. Perfect conditions for BFK’s first time seeing el Doughty de las Delectables, and she was duly impressed. In fact, she was so impressed that when we went to see the shitty, shitty Train on Saturday she was so disappointed we ditched out early. Of course, not before we got to see 1000s of drunken fratkids dancing to “Meet Virginia.” I think my eyes and ears are still burning from the horror of it all.

Yesterday I was talking to my friend Charles about the Doughty show and how his constant rejection was sort of starting to bring me down. He came to the conclusion that perhaps Doughty’s Make Sweet Sweet Love to me Vibe™ receptors were broken.

That Charles, he’s a genius.

I decided that I should probably pick a new victim to use the Vibe on, to make sure it’s still working. Because frankly, it’s been quite some time since there was any sort of making of anything up in this house, if you know what I mean.