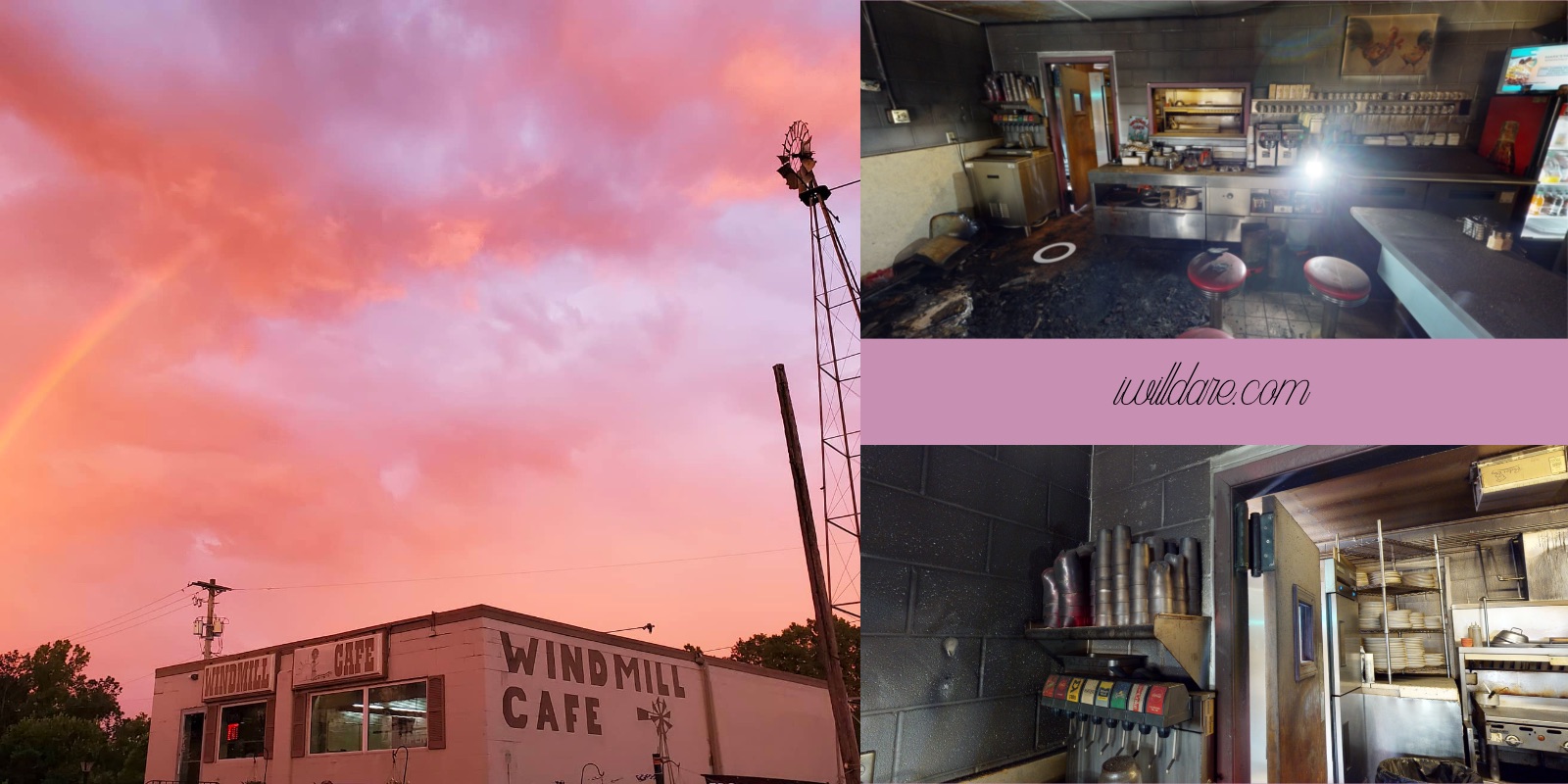 I’m not quite sure where to begin. This is gonna be a heavy one and I’m gonna cry while writing it, and that’s on top of already crying roughly 48* times today.

Okay, here’s a good place to begin. I want to tell you three things about my BFK (Best Friend Kari).

Sometime during the night of Monday, January 24th, there was a fire at Kari’s restaurant. Her husband, Atom (of wheat penny fame), discovered the rubble when he went in to open the place at 4:30 Tuesday morning.

Nobody was hurt, because the restaurant was empty. The building is still standing, but the inside has suffered extensive damage. If you look at the pictures above you can see how the pop cups on top of the pop machine melted together. They melted!

Officials who know these things & investigated think there was a chemical reaction in a basket of freshly-laundered towels that caused the fire and all the damage. I guess in the exact right circumstance grease residue + laundry detergent + towels = catastrophe. Who knew? I mean, I kinda knew that greasy rags could spontaneously combust, but I had zero idea that formerly greasy rags that have been washed can do that.

Science, why you gotta be so weird?

Fun Fact: I have not done laundry since this happened and I’m kind of afraid to.

Do you know my history with The Windmill? My parents owned the restaurant from 2008 until they retired in January 2020. That’s when Kari & Atom took over, much to my sisters & my relief. None of us wanted to run the place and we also didn’t want it to sit empty or go to strangers.

Kari started working at The Windmill in March 2019 after getting laid off from her corporate gig. She needed a job ASAP while she figured out what to do next. I asked my mom and the rest is history.

Despite government-mandated shut downs and all kinds of COVID restrictions, The Windmill kept on churning. Until Monday, that is. The place is a wreck, insurance is sorting things out, and rebuilding & repairing all the damage will take months. This means, that Kari & Atom and their eleven employees are out of work for, optimistically, six months.

Dang, this is already 600+ words long and I got so much more to say, but I will stop lest your eyes fall out of your head from reading so many words on the internet at one time. I’ll save the rest for later.

In the meantime, if you have the means throw a couple bucks in the pot for The Windmill staff. I’d appreciate it so much and I can 100% guarantee there will be tears of gratitude shed in your honor.

*This number change constantly, because I cry a little each time someone donates to the GoFundMe. I was a fucking mess this morning while we were setting things up and the donations popped in so quickly. I’ve cooled it a little now I only shed one or two tears each time I get the notification email.