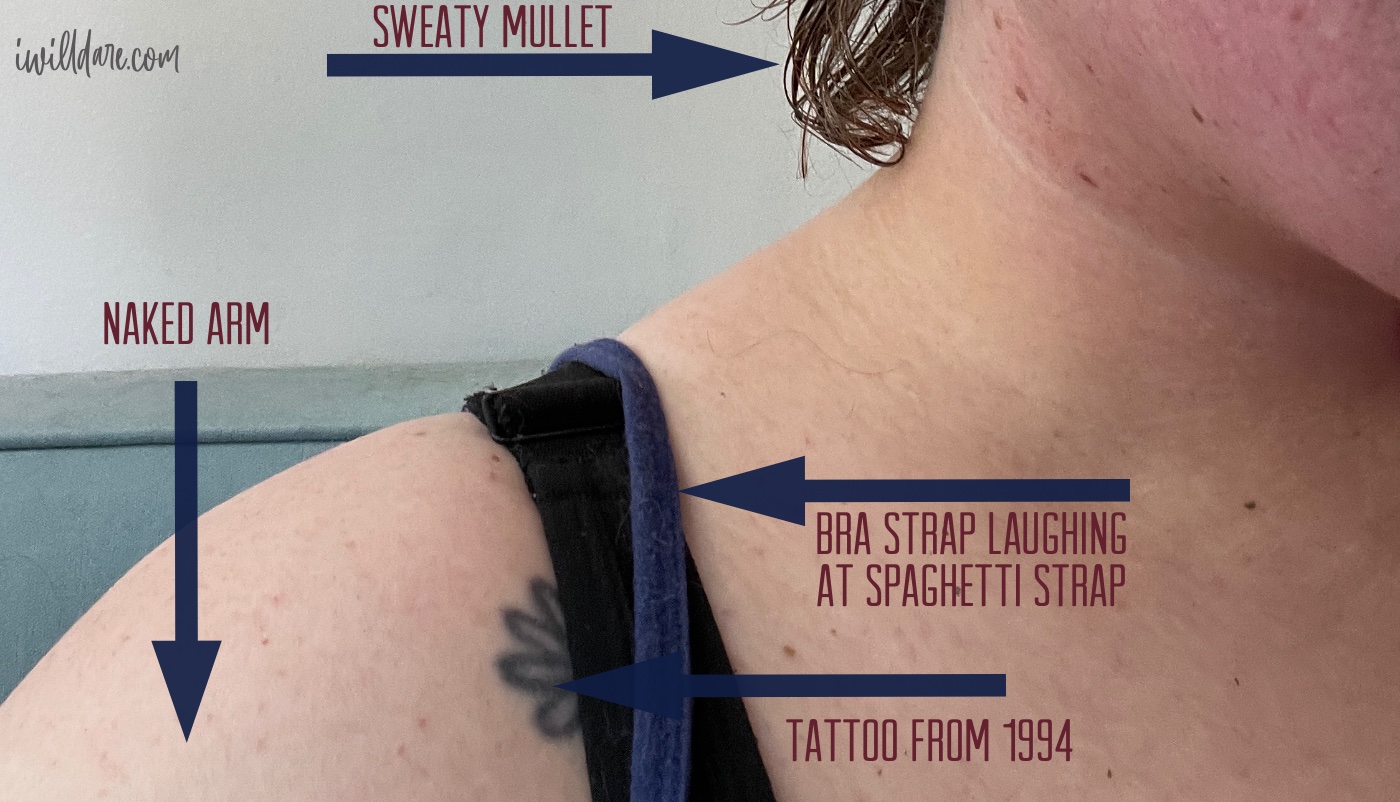 Today I wore a spaghetti-strapped shirt that did not cover my upper arms to pick up groceries. Despite what my inner monologue said from the moment I got up and chose to wear this shirt (again) to the time I got home with the groceries, nobody died. Not me. Not the people in the other cars who might have had to bear witness to my flabby upper arms. Not the kid who handed me my groceries. Nobody.

We all made it through this momentous occasion unscathed.

It’s momentous because my naked upper arms have not been out of the house since 1987. That’s not even an exaggeration for comedic purposes. I legit have not worn a tank top, sleeveless shirt, or anything of the like outside of my home since I was a teenager.*

Yes, the world taught me to hate my own body so thoroughly that for more than thirty years, regardless of the number of degrees outside, I would not subject the unwitting public to the site of my flabby upper arms. My comfort meant nothing when there were innocents about who might be disgusted by such a display of fatness.

The fact that I stopped shaving my armpits like a dozen years ago did not help matters. Is there anything worse than a fat-armed woman with hairy armpits?

Because I have lived in a body that was a problem to solve for as long as I’ve known I had a body (doctors put me on my first diet when I was four), the decision to go sleeveless to the grocery store was a big deal and caused no small amount of anxiety.

All morning I waffled between going upstairs to put on a regular t-shirt and tossing on the light sweater I have at the end of the couch.

“You’re only gonna be in Ruby for like 20 minutes,” I said to myself opting for the sweater. “It’s gonna be fine.”
“Just bring the sweater and you can put it on once you get there before they hand you your groceries,” I said.
“Just go upstairs and put on a decent shirt if you’re gonna worry about it this much,” I said.
“I hate you,” I said.

In the end, I shoved all my shame and reservations way down into the fiery pits of my psyche and I picked up the groceries in the spaghetti-strapped shirt. The kid who handed me groceries did not fall to the ground clutching at his eyes. Nor was he turned to stone upon seeing my naked arms. Realistically, he thought absolutely zero things about me and the way I was dressed. All he wanted was to give me my groceries and get the fuck back inside where it was cooler.

It was a big victory for me. I celebrated by turning the volume to 25 when Heart’s “Crazy on You” came on the radio and sang along all the way home with my arm stuck out the window (Reminder: Ruby, my 22-year-old Chevy S10, has no AC).

*I wear them in the privacy of my own home all the damn time. In fact, the second floor of Supergenius HQ is clothing-optional. This is only when I’m alone, which is like 92.3% of the time. When my family is staying here the clothing-optional area shrinks to my bedroom with the door closed. I’m modest.

**I am fortunate enough to have central air conditioning. I try to keep it a little bit on the warm side during the day because I am not Scrooge McDuck and also I like to cool it way down at night when it’s time to sleep. Upstairs. Where it’s 10 degrees warmer than it is downstairs.