For my birthday BFK got me some bath towels. They are lovely steely lavender soft, plush beauties. She also gave me a slew of hand-me-down towels because she has about 1000 of them and I have never purchased a bath towel in my entire life.

Wait. That’s a lie. I did purchase a Ralph Lauren rugby-shirt print bath sheet from the TJ Maxx in the London Square Mall in Eau Claire, WI in 1994. I think Sister #2 is its current owner.

Before my birthday I had just acquired bath towels, mostly from roommates or my parents. Once from a Holiday Inn in Milwaukee in, well, 1994.

From June 6th until yesterday these lovely towels were sitting folded up on top of two shelves of my beloved yarn cart. (Sister #4 hates my yarn cart because she said “it’s weird and old ladyish” and I’m all, “yeah, that’s my brand.) The towels were there to keep Wendell and Charles from stealing my yarn and then stringing it around the house. The towels have worked pretty well as a deterrent.

I removed the lovely towels yesterday and replaced them with old towels. This really does not pertain to my story here, but I want you to have all the details.

Memphis and Wendell love to lay on the towel on the top shelf of the yarn cart. Never at the same time, because Memphis hates Wendell with a fiery passion so consuming you would think Memphis was me and Wendell was . . . well I can’t even say it because it’s unfair to compare Wendell to a stupid, dangerous, racist gameshow host rapist.

Instead let’s say Memphis is me and Wendell is, mushrooms. Or Gwen Stefani. Or Bon Iver song titles. Or Marshmallows.

You get it. Memphis hates Wendell.

For the most part they take turns sleeping on top of the yarn cart and it is adorable and I take 139 pictures of them whenever they do it. 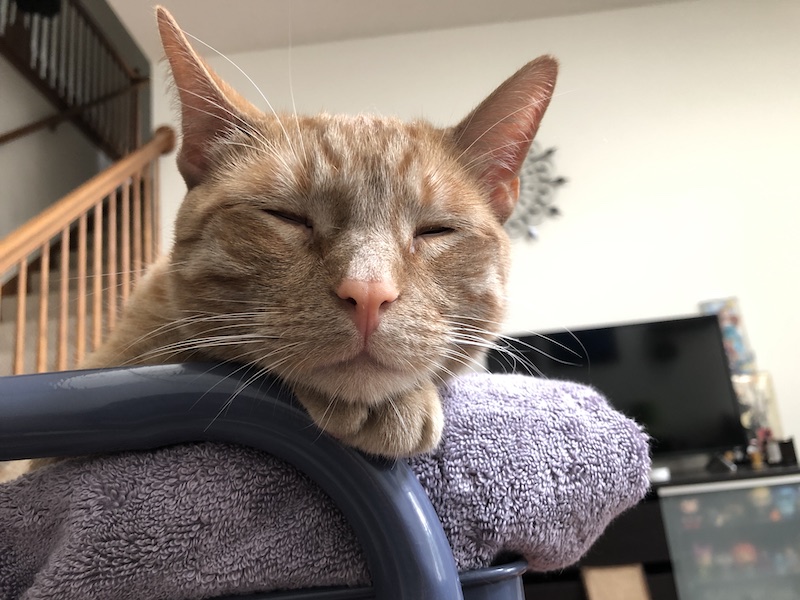 Wednesday night I told Maxwell that my one goal in life is to take a picture of them on the cart together. Memphis on top and Wendell on the bottom, like they were in cat bunk beds. He agreed that would be totally cute.

So last night, after CSA Supperclub we were sitting on our respective couches* — Max on the lovely fourteen-year-old blue couch and me on the hot-trash seven-year-old garbage couch. Memphis was laying on the top shelf of the yarn cart and then Wendell popped up on the coffee table and start to go onto the bottom shelf under Memphis.

IT WAS ALL HAPPENING. I put my wish out in the universe and hot damn, here it was coming true.

“MAX!” I whisper screamed. “MAX!” And when he looked over at me, I cut my eyes to the yarn cart. Neither of us wanted to make any sudden movements. Wendell continued to sniff while we both slowly reached for our phones.

But then Memphis realized what Wendell was doing and started swatting at him, and Wendell backed out of the second shelf.

Memphis threw a few more swats until Wendell had enough and jumped off the coffee table and found something else to be annoying about.

My dreams, shattered. My goals, unreached.

A little while later I realized Wendell’s favorite stuffed fish was on the second shelf of the yarn cart and he was probably just digging for that. Which, of course, means that at some point soon I’m gonna bury that fucker on the second shelf in hopes of getting the cat bunk bed picture I am yearning for.

*in unrelated news I had a quick, high-paying project land in my lap which means that the super rad couch I wanted is going to be mine in 6-8 weeks.