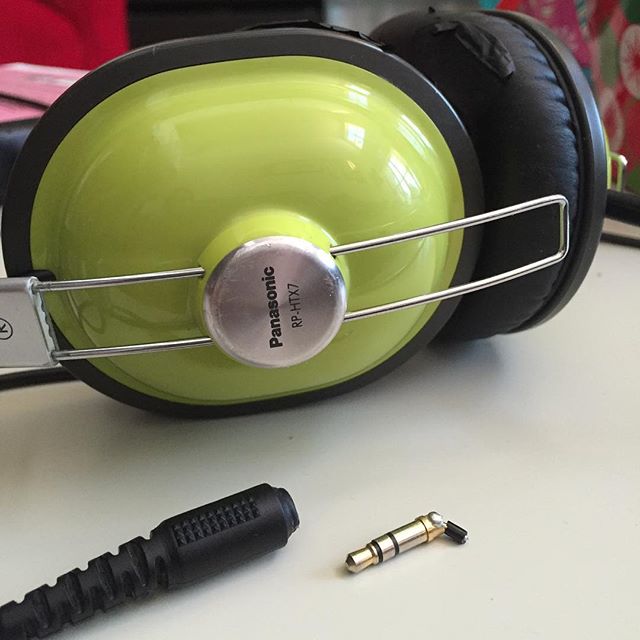 I was yakking on the phone with my friend Em when it happened. There are only two people who can turn me into a 1986-version of myself, that version of me who loved to sit on the phone and chat endlessly about music and boys and life. Em, a Westernerd pal who lives in Madison and my FFJ.

Enid slid from my legs onto the floor while I was telling Em about the insanity of hosting Christmas and all the ham I’ve been eating. I didn’t think much of it. The fall was gentle. I worried not at all for Enid’s safety, nor did I think at all of the headphones still plugged in to her.

You can probably guess by the fact that I call my computer Enid that I have an unusual attachment to certain inanimate objects. Arm-chair psychologists might draw parallels between this naming of things and the fact that I never had children. Or you can just chalk it up to me being a weirdo.

Anyway it was later Saturday afternoon as I was cuddling up with Jem and the Holograms: Showtime when I noticed a weird protuberance on Enid. A hole that should have been empty was not. I was so perturbed I put down the book, threw off the quilt, and got up from the couch to investigate. I gasped.

There, stuck inside of Enid (without the Memphis blues again) was the plug for my beloved headphones. The horror!

It’s hard to convey just how very much I loved those headphones. I will tell you that I wore them so often that the ear pads had started to shred and even then I continued to wear them. Sure, sure my head was frequently turned by another, newer pair, but I never bought them. I looked but did not touch.

When it comes to headphones I’m the pickiest, most demanding consumer. I’ve wasted tons of money on headphones because of this. I cannot stand earbuds. To me they are teeny, tiny torture devices. I hate on-ear headphones. I want to be surrounded by pillowy pads of softness while listening to Nathaniel Rateliff & The Night Sweats on repeat.

I have a pair of expensive (to me, $100+ is expensive) Sennheisers that I never wear because they pinch my glasses between my ear and my head in an uncomfortable manner. Also, they make the top of my head hurt after wearing them for an hour or so.

Right now I am wearing a pair of Phillips headphones which are passable as long as I don’t move my head or mouth at all. Once I do either of these things the headphones become creaky as fuck, which for someone who frequently bursts into song is a deal breaker. The creaky headphones and have made an annoying Monday even worse.

I ordered a new pair of the Panasonics, just like the ones I broke, but in pink because I need a fresh start. They cannnot get here soon enough. Trying to write with these creaky motherfuckers on my head is going to be impossible.