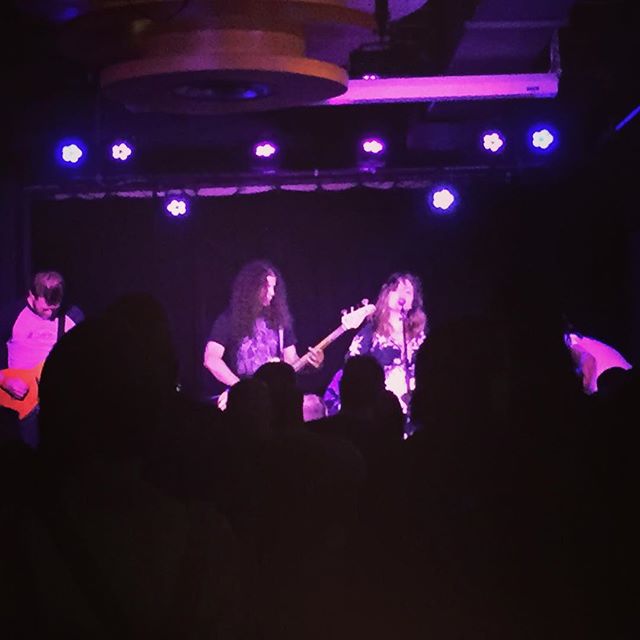 There was some weirdness at the end of Lydia Loveless’ set last week at the Turf Club. Apparently the weirdness happened right around the moment I snapped this pic as the band finished the show with “Mile High.” There was some drunken shenanigans which resulted in people storming off stage. I don’t know, I got all this second hand, because apparently I totally missed it.

I thought I was there in the Turf Club with my friends. My eyes were open, I was facing the stage. I wasn’t even dicking around with my phone. Yet somehow, I missed this tiny drama.

The cool jaded part of me wants to just chalk it up to the fact that I’m totally immune to rock & roll drama. After seeing Paul Westerberg lob a full bottle of whiskey into the balcony of The Riviera in Chicago, I’m unfazed by things.

But that’s not true. I was somewhere else in that moment, some other plane just me and Loveless’ music. I’m not at all sad that I missed this oddness at the end of her set. I’m kind of glad I finished the concert with just me and the music and a la-la-land population: Me.

This was my second time seeing Ms. Loveless at the Turf Club or anywhere, really. This show was quite different than the one I saw in November. Her witty stage banter was on point and I could have spent the entire show tweeting her one liners like this:

ōIÆm from rural Ohio. We were probably giving blow jobs to Def Leppard in 2010,ö #LydiaLoveless

I wish I could accurately put into words how much I adore Loveless’ music, how her writing is so genuine and feels so personal and yet universal at the same time.

God help me, but Chuck Klosterman once made the observation about how the genius of Paul Westerberg was that he wrote songs that felt intensely personal and at the same time made thousands of people feel like the songs were about them. The same thing is true about Loveless. And I don’t think having a knack for writing those kinds of songs is something a lot of people have.

For instance, I love Jason Isbell’s songs. I think he’s a lovely writer. He creates beautiful songs with spectacular images, but I rarely feel his songs are about me. I wish his songs were about me, because then I would be leading a bigger, grander life.

But Loveless’ songs? Those are about me. I live her music. Or have lived her music. And, if you recall, I am often an egotistical music lover.

Speaking of, she played a weirdo tripped out noisy version of “Out on Love” Sunday night and it reduced me to a giant pile of goo in the middle of The Turf Club. I think part of my DNA is still on the floor there.

I already can’t wait to see her in September when she plays Festival Palomino in my backyard. You should totally go. Also, you should download this Folkadelphia session, which is amazing.

OH! And one more thing. This happened the night before the Lydia show, which I missed, but there is video evidence and I am sharing it. That’s my BFF Wolfdogg singing Jason Isbell’s “Traveling Alone” with Lydia Loveless and the fact that this happened still feels me with so much joy my eyes nearly leak.

Things I didn't expect to do tonight. Like sing with someone incredible. #lydialoveless