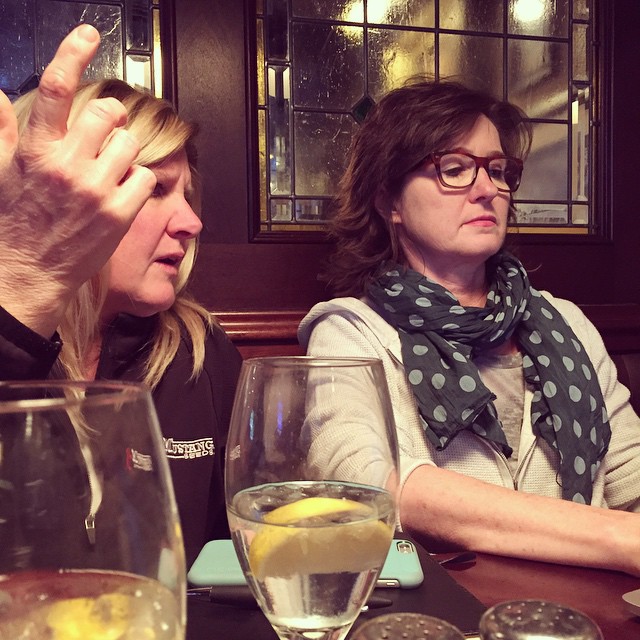 “I’m forty-two now, guys,” I announced just moments after sitting down to lunch with two of my all-time favorite coworkers ever.
“That’s not the kind of thing a lot of people announce,” Shannon said.
“I know, but I just had to tell you that I’m not in my thirties anymore,” I said.
“Well good for you,” Shannon said. “I’m proud of you.”
“Me too,” I said. “It took a long time to get here.”

And much like high school once Hell, Inc. closed the Minneapolis office our marketing gang of girls kind of scattered to the wind, mostly keeping in touch through Facebook likes and the occasional “OMG Can You Believe?” kinds of emails.

But a few months ago my favorite former boss JTo went back on the job market and was in need of an updated portfolio this is a really long explanation to explain how I ended up at an Irish pub in downtown Excelsior Monday afternoon with two of my all-time favorite co-workers.

Shannon was a surprise. It was supposed to be just JTo and I talking about her website, but as I lumbered through the restaurant Shannon shot out of a booth and started jumping up and down howling. I screeched with joy return. We were like animals raised by humans, returned to the wild, and then being reunited with their humans again. There were hugs and kisses and smiles so big my face kind of still hurts.

As we reminisced and gossiped and caught up with each other’s work and lives and families I just sat their grinning the whole time. Not just because I missed these incredibly smart and funny women, but because being with them reminded me that Corporate America wasn’t all bad.

Shannon and JTo are two of the women who taught me how to work, but even more than that they taught me that I know how to do stuff and that stuff is valuable. Shannon was one of those people who just assumed I knew what I was doing and because I liked her so much and never wanted to let her down I pretended like I knew. We made some pretty rad stuff together.

And JTo? Man, she let me do so many things I was not qualified to do — art direct a major website redesign, create entire marketing campaigns, and just about any other cockamamies creative idea I came up with. She challenged me all the time, but also showed me how to make clear arguments for my point of view and how to work the tricky waters of office politics.

God, it was good to see them. It was one of those shot of adrenaline reminders that I’m smart and capable and people miss me even when I’m not around.

Sadly, I had to leave after three hours and as we hugged goodbye outside the pub, they howled with laughter at seeing ol’ Ruby parked across the street.

“Oh Chromey,” Shannon said. “I’m so glad you never change.”
“But I totally did,” I said.
“How?” JTo asked.
“Dude,” I said. “Who would have ever thought I’d be the one bailing on the fun because I had a meeting to go to?”

Both women were struck silent for a second. “Yeah,” JTo said, wrinkling her brow. “That is pretty weird.”
“Because I’m a total grownup,” I said as I walked across the street.
“Grownups don’t say that,” Shannon said.

I can’t wait to see them again in August.