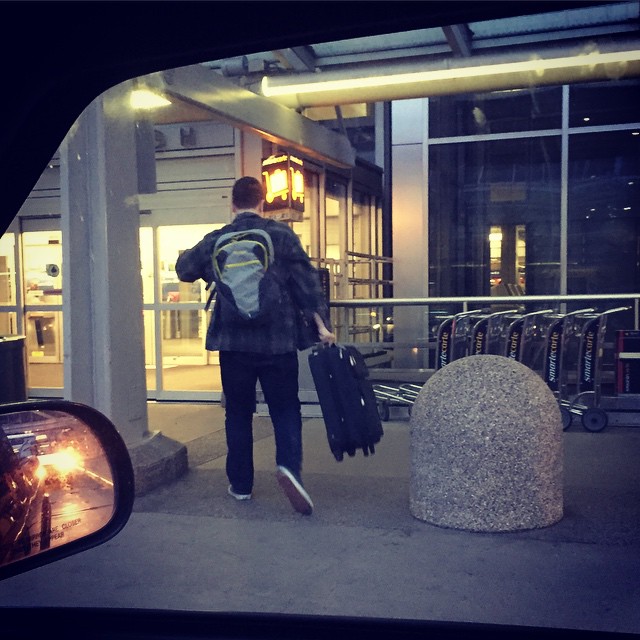 When my nephew Max was a little kid he was afraid of Sasquatch. He would sleep with my Grammu’s old cane and talk about how Sasquatch might come and scare him in the night.

I tried to alleviate that fear by telling him that no way would Sasquatch waste his time scaring little boys in their beds.

“He’s totally gonna march down 494 and into Best Buy HQ to make all the grownup business people poop their pants.”

It was a story that helped him and eventually that fear of his turned into a little bit of an obsession.

This morning as we drove past Best Buy HQ at ridiculous o’clock in the morning, both of us silent because neither of us wanted him to leave, I asked him it he remembered that story.

“Here you go,” I said as I stopped in front of the Delta Gate, pulling his suitcase from behind his seat.
“Thanks for letting me stay and everything,” he said and opened the door.
“I love you. You can stay any time. I’ll miss you.”
“I’ll miss you too.” He stood outside of Ruby, shrugging into his backpack.
“Don’t forget to read Catcher on the plane!” I shouted as he shut the door.

He rolled his eyes and shook his head and I know he totally loves me even though he’d never say it. Leaving that sixteen-year-old-sized piece of my heart at the airport kinda broke it a little. Having Max here was so good even though it meant I had to wear more clothes than usual and I couldn’t sing as much as I usually do and I ate like a sixteen-year-old boy for a week. Can it be June now? I miss my family so much.