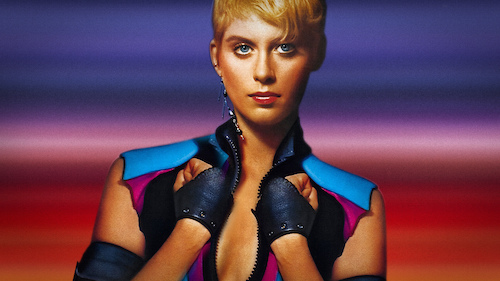 I grew up in a Girl World. That’s what I like to say. I have three sisters and zero brothers. The neighborhood we grew up in was filled with girls around our age. There was Jenni, the three Hanson girls, Kim and Steph, Dawn, Vicki, Beth, Kathy, and those were just the girls we hung out with on a semi-regular basis.

There were boys, of course, but they were periphery at best until puberty, and at that point they had become delightful/frustrating/fascinating creatures we wanted in some capacity we couldn’t even understand ourselves.

With that background I kind of understood this quote by author Andrew Smith in Vice that has caused an uproar and backlash. You know how these things go if you spend more than 38 seconds on Twitter.

On the flip side, it sometimes seems like there isn’t much of a way into your books for female readers. Where are all the women in your work?
I was raised in a family with four boys, and I absolutely did not know anything about girls at all. I have a daughter now; she’s 17. When she was born, that was the first girl I ever had in my life. I consider myself completely ignorant to all things woman and female. I’m trying to be better though.

Like I get where he’s coming from. I too was raised in a world where I did not know anything about boys at all. When people are aghast about how I’ve never seen any of the “Star Wars” movies I shrug and think in my head “that was boy stuff we deemed unworthy.”

In Girl World “Grease 2” and “The Legend of Billie Jean” were the movies held up in the highest esteem. These were the movies you quoted and discussed until there were no more words left.

We deemed tons of “boy stuff” unworthy — GI Joe, the Dukes of Hazzard, StarTrek, and most classic rock. And really when I look back we just called all the stuff we didn’t care about “boy stuff.” Because we loved boy-dominated things: The Outsiders, Stand By Me, and New Edition. We did things that were traditionally labelled boy activities: played endless hours of Pac Man, lit stuff on fire, tramped around in the woods behind our house, and concocted elaborate fantasy games featuring pirate ships and horses and John Stamos as our boyfriend.

But here’s the thing and why I found Smith’s quote so puzzling. Even though I grew up in Girl World I learned about boys. Not knowing about boy world or men wasn’t an option. It was, sadly, “the world.”

I don’t have a husband or a son, and yet I know all about the male experience. Why? Because I have seen movies and read books and listened to music my entire life. The male experience dominates our culture. It is not an option at all no matter what kind of world you grew up in to not know about men and boys.

The thing with what Andrew Smith said, regardless if you think it’s overt sexism or a stupid slip of the tongue, is that it is the very definition of male privilege. He didn’t know about girls because he didn’t have to. Because in our society the female experience is other and unimportant and something you don’t have to know about if you are not a woman.

And you know what? Fuuuuccckkk that noise. I have never read an Andrew Smith book and I’m inclined not to, because anyone who is so incurious as to not even investigate what the lives of half the population are like is not someone I should spend my time on, you know?

Vintage housewares are my weakness. #SpinsterUpdates

Incidentally, this is exactly how I got my entire set of Temporama dishes for $100.

Sometimes I make ridiculous best offers on eBay, and so now I’m going to be the owner of a beautiful yellow vintage Dansk Kobenstyle pan for the low, low price of $42.95 (that includes shipping!)