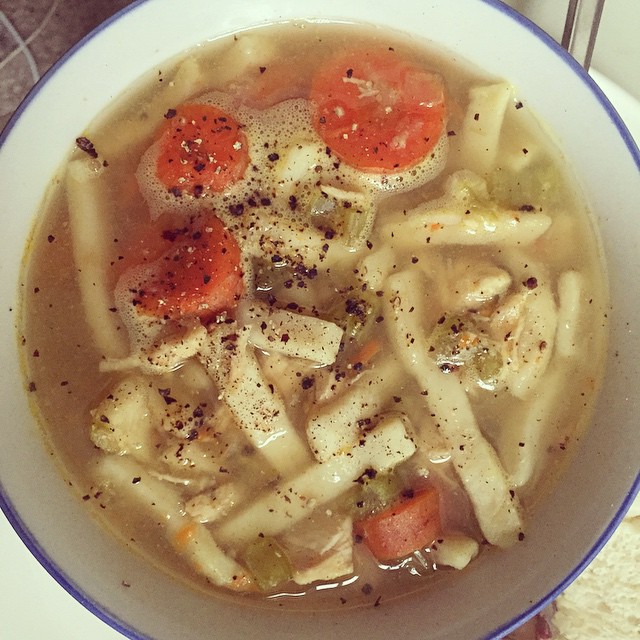 A few weeks ago I hosted Family Dinner at Supergenius HQ. Sister #3 had requested chicken noodle soup and since soup is not easy to tote around in mass quantities, the Fam came to my house for dinner.

I love making soup. Of all the things I know how to cook or am willing to learn how to cook, soup is my favorite. Soup is the food equivalent of love. It’s made with good things and it takes a long time and it’s always worth the effort. If I feed you soup it means I love you.

Once upon a time ago I proclaimed that if I made you pasta e fagioli soup it meant I wanted to seduce you, but then my friend Atom pointed out that I made it for our entire Rock & Roll Bookclub and he wondered if there was something I needed to tell all of them.

Chicken Noodle Soup is the easiest of all the soups to make. It’s mostly just chopping and simmering. I make it like my Grammu made it, which means the only noodles you can use are Reames frozen egg noodles. The brand of egg noodles is imprinted on my brain, because I hauled ass to Juba’s (which is what the grocery store in Shakopee used to be called) many a time in my younger years to get them for Grammu’s soup except back then I was pretty sure the were called Mrs. Reames. Mostly I knew the noodles by site and not by name, and when they redesigned the packaging a few years back I was a little panicked. No worries though, new packaging same egg noodley goodness.

To go along with the soup we also had “make your own sandwiches” which is a favorite with The Tibbles. You throw two kinds of deli meat, some cheese, and a few vegetables on the table and those boys are in heaven. There must be some sort of power that comes with choosing what kind of meat and cheese you’d like on a sandwich that really appeals to the pre-pubescent set.

As my dad worked his way through the sandwich line I heard a screech. “Hellmans?” he asked, full of disdain. “Hellmans?”
“She’s so fancy with her genuine mayonnaise,” Sister #3 said.
“The other jar is generic Miracle Whip,” I said because I knew without any other word from him he was displeased with my choice of sandwich spread.
“Generic?” he asked.
“It tastes the same,” I said.

He came out to the living room where we were all gathered around the computer talking with the Portlandians and slurping soup, shaking his head. “Hellmans,” he said as he sat down.

Yeah, he was mostly kidding with his disappointment at my brand betrayal, but there’s a grain of truth in it. We were a Miracle Whip family my whole entire life and I had shunned that as though I was turning my back on my heritage.

I wanted to point out how I still use Tide laundry detergent and Skippy peanut butter, that I hadn’t totally forgotten where I came from. But talk quickly turned to milk and how Sister #2 and I had left the 2% flock.

Brand loyalties run deep in our family. So deep that it never even occurred to me until Sister #2 bought something off mom & pop brand. I can’t remember what it was. Maybe dish soap? Syrup? What I do remember is her saying, “I just like it better.”

Sometimes betraying your family is totally worth it.