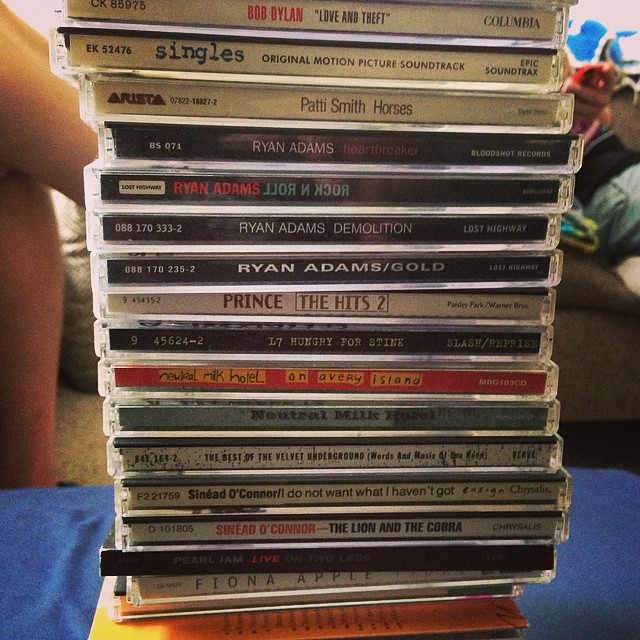 Last night I hosted Rock & Roll Bookclub at Supergenius HQ. Even though we’ve been down two members for a few months due to teen volleyball sensations and their hectic schedules, it is still one of my favorite social events.

The evening started with Jaycie & Max raiding my ancient CD collection. This collection of plastic is housed in a giant, dusty Amazon box that has been sitting on my kitchen floor for roughly three years. It’s filled with a few hundred CDs. The kids these days are into the CDs. It’s a novelty of sorts. Kind of like how I am with vinyl nowadays.

They pulled the giant box into the space between the living room and dining room and cuddled right up the box. Sister #2 sat in the red chair adding her color commentary on my musical proclivities. I sat in the La-Z-Grrl drinking a gin & tonic and defending myself.

“You have a lot of Bob Dylan,” Maxwell said. “And Tom Waits. But no Replacements.”
“I keep all the good ones in the bookcase,” I said, pointing to my Grandpa Cub’s bookcase behind him. “That’s where the Liz Phair, Wilco, and ‘Mats are.”

Eventually Wolfdogg had to get in on the action. He stood over the box, occasionally dipping down and pulling up a handful.

“Her Indigo Girls phase,” he said, waving around three CDs.
“That basically says I went to college in the 90s,” I said. This defense was also used for the two Dave Matthews’ Band they found. And all of the Mighty Mighty Bosstones, which Wolfdogg tried to shame me about but I refused.
“She loooovvvveeedddd Dicky Barrett,” Sister #2 said.
“I did,” I agreed.
“Whenever I see ‘Clueless’ I say, ‘Jodi loved Dicky Barrett,'” she said.

“Hey look, Ben,” Sister #2 said, waving ‘The End of Silence’ by Rollins’ Band in the air.
“That might actually be his CD,” I said.
Ben grabbed it away from my sister. “It is my CD. It has my name on it.”
I shrugged.

Once they were done, Maxwell had a small selection mostly greatest hits type comps: Johnny Cash, Aretha Franklin, Bob Marley’s “Legend” which he planned to give to his friend Bennett. He also took some Tchaikovsky. Meanwhile Jaycie piled up about forty CDs in front of her.

“Let me see,” I said, making grabby hands at her. There was Patti Smith and Neutral Milk Hotel. Sinead O’Connor and Fiona Apple. She had also taken all the Bob Dylan, Ani DiFranco, L7, and Ryan Adams.
“Oh,” I sighed at Wolfdogg, who was sitting nearby on the blue couch. “Did you know me during my Ryan Adams’ phase?”
“You were still in the middle of it,” he said grimly. “The only song you would listen to all the way through on the way to Chicago was ‘Dear Chicago.'”
“Yeah,” I said. “I love that one.”