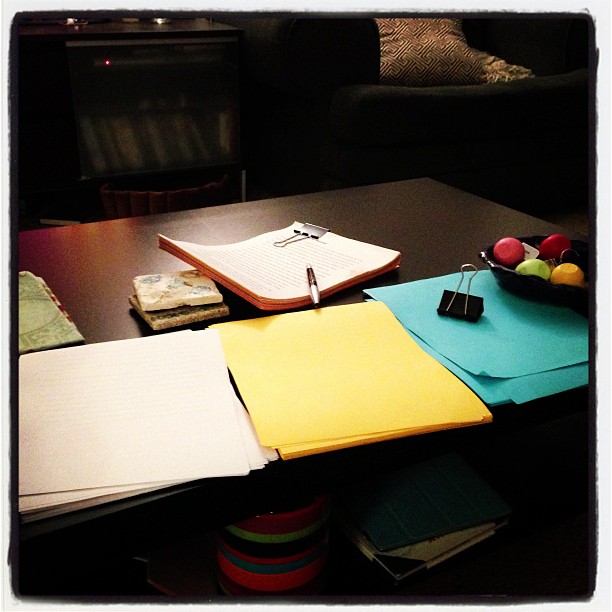 Last week, my friend Donna Trump, a lovely and talented writer I met in on of Vodo’s writing classes at The Loft a bajillion years ago asked me to take part in the Writing Process Blog Tour, which involves answering four questions about your current work in progress.

Before I perpetrate this fraud, you should just go read Donna’s answers because she is smart and thoughtful. I am a smartass and thoughtless. So you’ve been warned.

Question #1: What am I working on now?
This is where I admit to being a total fraud. Allegedly, I’m working on the second draft of a novel, that I call Rock & Roll Loudmouth. Is that the actual title? I don’t know. I really suck at titles & headlines, which you probably already know if you read I Will Dare ever. The first draft was called Bare Necessity because of this song from “The Jungle Book”.

Question #2: How does my work differ from others of its genre?
I’m not sure if it has a genre or what its genre would be. It’s a rock & roll book written by a woman about a woman geared toward adults. It follows that old cliche about writing the book you want to read. I spend a lot of my time and effort seeking out books about rock & roll by women. It’s not easy. In fact it’s really ridiculously hard.

I’ve had great success with memoirs (Pat Benatar, Kristen Hersh, Heart), which is nice, but not so much with “grown-up” novels or essays. I use grown-up because I don’t know what we call the group of literature that’s not YA or Middle Grade. Is it just literature? You can find a lot of music in young adult novels, which I love, but often it’s written by men about young men. If you know any music-focused books written by women for young women, I would love to hear about them.

Question #3: Why do I write what I do?
Because I want to.

Question #4: How does my writing process work?
It doesn’t (see Question #1).

It works best when I’m vigilant about protecting my writing time. I haven’t been so good about that lately, letting work eat up my time during the week & letting other tasks take over my weekends (taxes, cleaning for Easter dinner, Veronica Mars marathons, etc.).

There’s this weird sense of guilt I have when I “waste time” working on The Beast when I have paid work I could be doing. It’s stupid, I know, but its the truth.

I’m not much of a tagger, but if you have a work in progress you want to write about, do it & let me know so I can read about it.