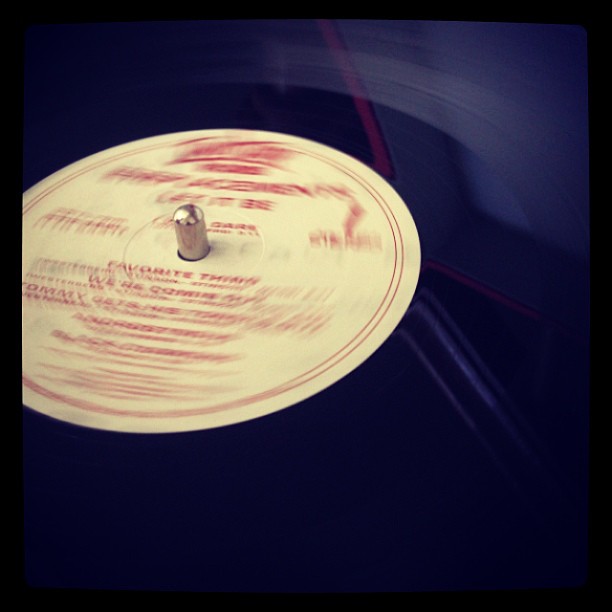 I don’t have a lot of records. I did once upon a time ago, but the crate I kept them in was swiped from the front lawn of the house I was moving out of while I was in college. There are a few of those that I mourn. Madonna’s “True Blue” 45 that was actually blue. One of The Beatles’ 45s which was most definitely a reprint, but a gift from Jodi Hanson. This is not to say that I would have any, or all of them had they not been stolen. I go through long streaks where I am surprisingly unsentimental and detached from things and stuff. There are times where I fantasize about burning shit to the ground and starting over with nothing.

We all have that fantasy right? And then I immediately feel guilty because I know I would be sad to lose the afghans my grandmothers made for me, the signed copy of Cat’s Cradle, and some other crap I can’t name right now but would miss some day down the line.

How I got off on this tangent, I don’t know. I didn’t come here to write some thing about having too much junk, which is a brilliant coincidence. I stopped typing mid-sentence yesterday (when I started this), right after the word junk. The post and thoughts quickly abandoned because The Pixies sounded weird. So weird that even my nephew, Cade, stopped playing Minecraft long enough to ask, “Is that supposed to sound like that?”

“No,” I said, getting up from the couch to investigate.
“Did I break it?” he asked. He had recently flipped the record and now the sound was coming out slow and warped.

We did what any great tech support person would do, we turned it off and on. We tried different records — Heart’s “Little Queen,” The Replacements’ “Let it Be.” Same slow, warped sound coming. We switched speeds from 33 to 45 to 78 and back to 33, where it belonged. It would play at the right speed for about a verse then slow back down for the rest of the song.

Son of a bitch. 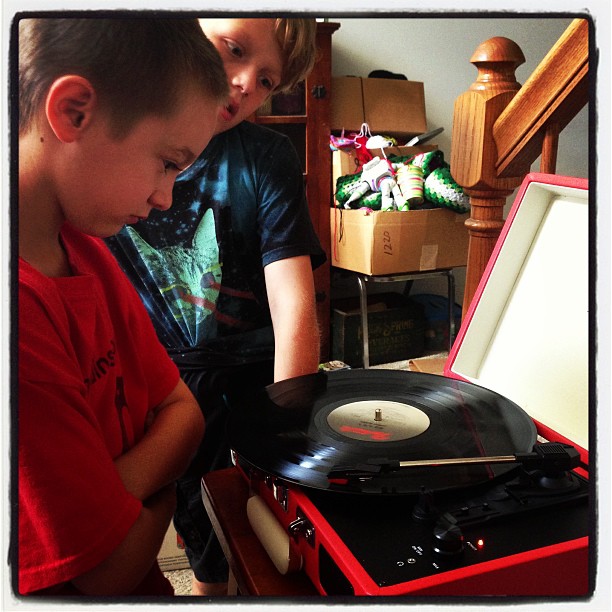 My brand new, unboxed for 45 minutes, absolutely adorable record player was utter crap. Look at how orange and cute it is. But heed my warning, never trust a big butt and a smile, I mean don’t fall for adorableness and price over function. Granted it’s not like I just jumped in blindly. I’m not stupid. I read all the Amazon reviews and took a calculated risk.

So now I’m on the hunt for another record player. I thought maybe just that small taste I got yesterday would either sate my desire and let me go back to being all MP3s on my computer all the time, but no. Not even close. Suddenly all I want to do is listen to records. I want to put the needle down on the vinyl. I had forgotten how much I missed that small action and now like any good junkie, I want more. I want more of it all the time. ALL OF THE TIME.

Which means I’m on the hunt for another record player. Boo. I’ve had recommendations for inexpensive (remember: poor, single, mortgage-having freelancer here) turntables, which are not cute but are functional.

I haven’t made a decision yet because I’m still in the pouty, entitled stage of desire thwarted. I really wanted a record player with internal speakers, because I don’t want big, stupid speakers clogging up my already small and crowded living room. So much pouty brattiness, I know. I feel like Veruca Salt right now, and I only feel a little bad about it.