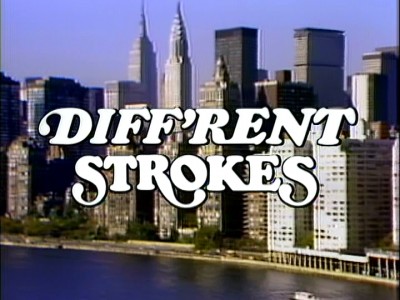 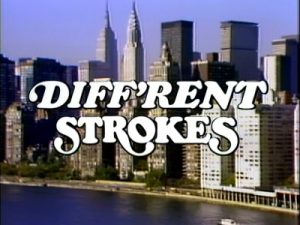 Okay, this is only a live-blog in so much as I’m writing it as I watch. I’m not posting it as I write, so sadly you will not be able to leave comments as the action breaks.

I watch “Diff’rent Strokes” Monday nights, and by watch I mean it’s on the TV with sound while I do various things like the dishes, read The Beast, or play on Twitter. But now I am done reading The Beast, and I have nothing else I feel like doing tonight. The Tibbles’ kicked my ass today and my shoulder is sort of achey from wrestling with Liam.

9:04: Willis enters to Kimberly and Arnold playing Scrabble and is super-pumped to hear Lenny called. “If you aren’t a Tarantula you’re nothing but a lonely creep.”
9:05: The Tarantulas have red satin, shiny jackets, and giant yellow-tinted sunglasses. They ooze into the Drummond household and sexually harass Kimberly.
9:06: After they leave, Kimberly says. “Willis, those aren’t the kind of guys you usually hang around with.”
9:07: Mr. Drummond calls the Tarantulas “three teenage punks, smoking, swearing, and being loud.” He forbids Willis from joining the gang because “those boys are trouble if I ever saw it.”
9:08: Kimberly comes into the boys’ bedroom looking for Willis’ old gym bag because her’s is too new for ballet class and she needs one that “looks funky.”
9:09: Arnold discovers Willis’ Tarantula jacket in the gym bag. Willis walks in as Arnold discovers the jacket (of course) and freaks. Arnold asks, “Why you wanna hang out with crummy guys like that for?” Willis threatens Arnold with a closed fist in front of his face, “I know you won’t fink on your own brother.”
9:10: Willis leaves the room to make peanut butter sandwiches to seal the “don’t you snitch” deal. Arnold tries on the shiny red jacket when Mr. D walks into the room. He is not pleased about Willis joining the gang.
9:11: Mr. Drummond is wearing a plaid shirt and a red cardigan. It is hard to take him seriously as he talks about punishing Willis.
9:12: Mr. D tricks Willis into lying about being in the Tarantulas even though Arnold is making ridiculous “cut it out” signs behind Mr. D’s back.
9:13: “I should have known a nerd like you would blab,” Willis says to Arnold.
9:14: Arnold is being a total “I told you so” jackass. Kimberly says, “I’m glad you’re not going to be one of them, those guys are nowhere.”

Commercial break. I just told my cat, Paco, to go play, which is what I say to my nephew Liam when I’m tired of him hanging on me.

9:16: Up in their bedroom, Willis gives Arnold the silent treatment. “That’s weird I keep hearing this annoying little voice. Abraham, have you learned to talk?”
9:17: Arnold asks if there’s anything he can do to make Willis feel better. Willis says, “Make like a bee and buzz off.” The studio audience laughs uproariously.
9:18: Mr. Clark, Jimmy’s father, bing-bongs at the door. He needs to talk to Willis urgently. There is much concern about the D-Day the Tarantulas have planned. Apparently a friend of Mr. Clark’s at the police station tipped him off about some sort of trouble. Mr. Clark found a receipt for 2-dozen cans of spray paint in Jimmy’s room. Willis stays mum about the D-Day plans.
9:19: Willis leaves the premises even though he is grounded, much to Arnold’s consternation. Kimberly twirls in talking about how fabulous ballet class was. Willis calls from the police station. “What’choo talking ’bout, Willis?”
9:21: Inside the jail cell, the Tarantulas talk about how much their dads are going to kick their asses.
9:22: Kimberly and Arnold rush into the police station asking Willis if he’s okay. The police officer picks up Arnold, sets him on the desk, and then pinches his cheeks (because that’s totally appropriate).
9:23: Arnold brings bails money, $12.58. It is revealed the Tarantulas are in jail for spray painting words all over the school walls.
9:24: “Willis, never in my worst nightmare did I think I’d come here to see you.” Mr. D is all about the melodrama while looking at his son behind bars. Jimmy says he’s gonna do “some talking, for all our sakes.” The mean Tarantula yells “bud out you little squirt” at Arnold, who promptly hides behind the Sargent’s leg.
9:25: Jimmy says that Willis was there to stop them. Willis says he didn’t say anything because he’s not a squealer. “Willis, the prisons are full of guys that wouldn’t squeal,” Sarg says.
9:26: Willis is released, “Man, it sure feels good to be out of that cell.” Studio audience applause.