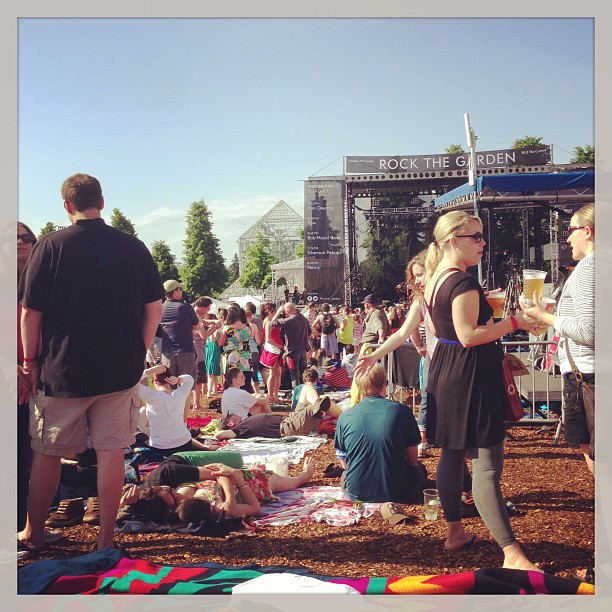 I spent most of today recovering from all of yesterday. It involved a light nap, some book reading (The Original 1982), some record listening (“Personal Record“), and some Buffy-watching (the one where John Ritter plays Joyce’s robot boyfriend).

I needed the recovery because yesterday I broke my four-year dry spell and attended a live-music event. I didn’t intend to take a four-year break, but it happened. When I lost my last “real job” I decided concerts were a frivolous expense I was not willing to make, but then my niece Jaycie expressed a desire to Rock the Garden. So in the middle of a monsoon we set out from our suburb and ventured forth to the Sculpture Garden prepared to rock.

Well, she was going to rock and I was going to sit in the grass, watch people, and listen to music. I was only really interested in seeing Low and Bob Mould, but mostly Low because I have seen Bob so many times I refer to him as Uncle Bob and I was Low-curious.

Now, here’s a little known fact about one Ms. Jodi Chromey. I have a near phobic fear of being stuck somewhere and being bored. Like really-long, boring meetings give me panic attacks. Holiday Parties I am made to attend? Panic city. In fact, I had my very first panic attack (only we didn’t call them that) when I was about 15 and stuck at a restaurant with my parents and some of their friends. We were there for hours. I thought I was dying.

I very nearly got to the thought I was dying stage of the panic attack during Low’s “song.” I had that itchy, fluttery chest thing going on, and I could feel the tears and shallow breaths approaching. Thankfully before the panic took hold, they knocked that bullshit off by espousing “Drone, not drones.”

WHAT THE FUCK EVER.

I also get that we were at the Walker Art Center and that perhaps what Low was doing was art.

However, I still call bullshit. If you have to explain the point your music is making by saying “drone, not drones” then your music is not making a point.

Then what are we left with? 27-minutes of unpleasant, upsetting noise that from my vantage point felt openly hostile to the audience. To me it seemed like Low was pissed about something and was taking it out on my ears.

Now, if this were their concert alone, I’d be all “get on with your bad selves Low, use your platform.” However, this was a festival with a lot of bands in the line-up, and when you’re #2 in a line-up of five, chances are the audience might not be as familiar with your work. So why pull such an asshole stunt? I don’t get it. Maybe they were only playing to their “true fans” or the people most likely to become “real fans” whatever. I do give them credit for risk-taking and getting people talking. However, I will not be shelling out any more of my dollars on Low. Fool me once and all that.

Well, apparently I had more to say about Low than I had intended. Stay tuned for tomorrow’s rant on faux hippie hipster assholes who ruin everything. It promises to be just as rantalicious as the Low rant but with more patchouli!