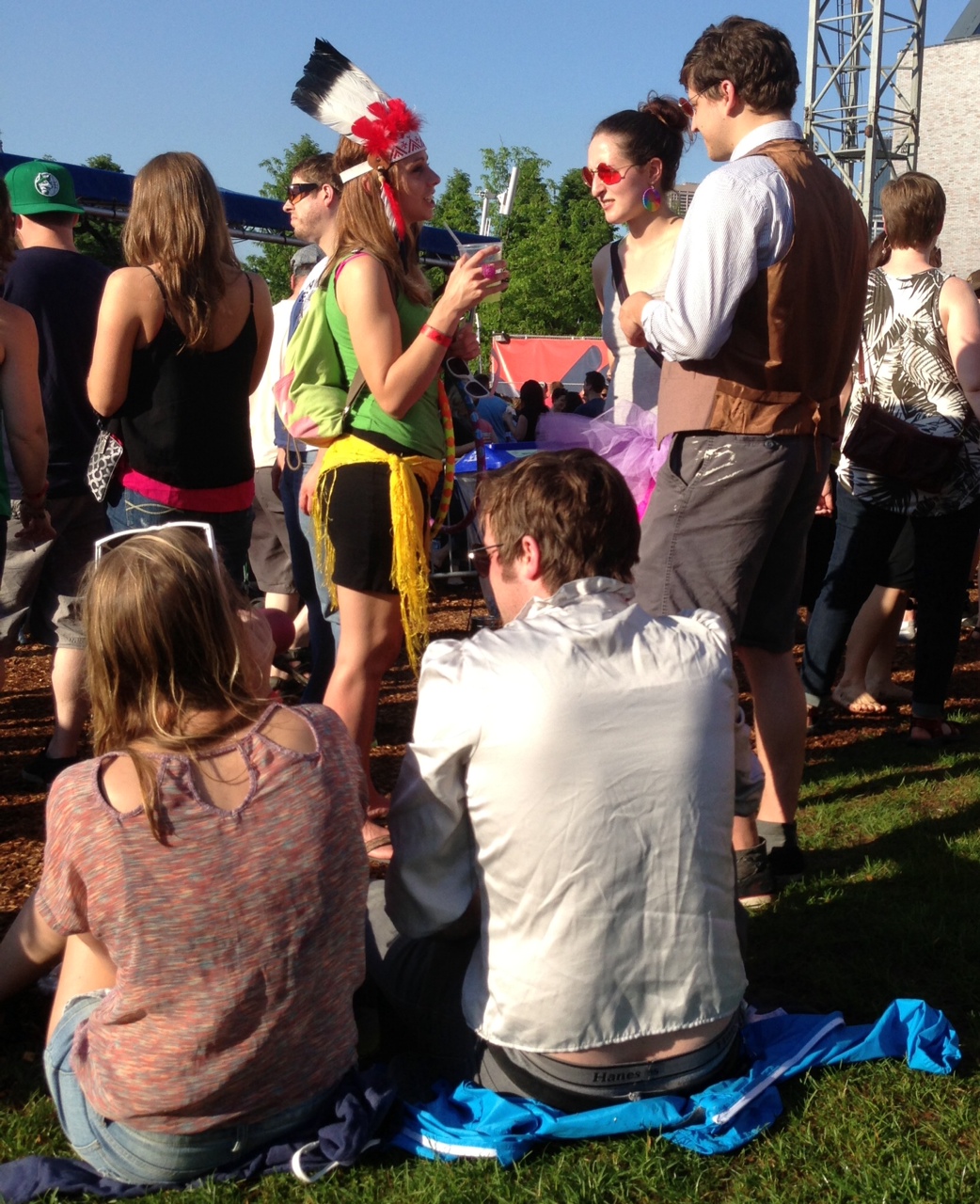 I’m pondering changing the name of this website to “Cranky Lady Leaves the House and is Cranky.” Now Part II of yesterday’s rant.

So after Low’s horrific 27-minute long assault on my ears, Bob Mould took the stage. Uncle Bob can rock like nobody’s business. Seriously. He tore through a bunch of Sugar songs, a few Huskers, some solo stuff, and then capped it all off with “If I Can’t Change Your Mind” which is probably on my Top 20 Favorite Songs of All Time List. Maybe even Top 10. I fucking love that song. I love that song so much that whenever I hear him play it live tears leak from my eyes because my body doesn’t know what else to do with all the joy.

However all the joy Uncle Bob brought to the cranky old lady was short lived, because in the middle of his set I was besieged by the a band of Faux Hippie Hipsters Who Ruin Everything. 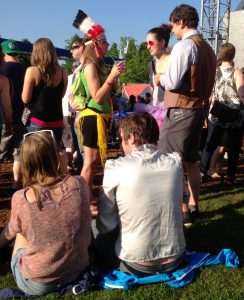 You may not be able to tell from the picture, but the FHHWRE were a band of five college-aged kids. In my snapshot, only one of the three women is wearing the offensive headdress, however when they arrived two of them were adorned in offensiveness. You know that wearing hipster faux Native American headdresses is incredibly offensive, right?. Okay, good.

The third woman was wearing neon pink, knee-length leggings, a lavender tutu, a grey tank top, and red John-Lennonesque sunglasses. Oh, and thank you universe, she was also wearing full-on brief underpants. I thank the universe for this because she took the tutu off at some point and that left her leggings-covered ass to hover disconcertingly close to my face whenever she had to bend over to dig her American Spirit cigarettes out of her embroidered bag.

Speaking of tutu leggings, her boyfriend wore a matching pair of sunglasses that went well with his rainbow-tie, peace-necklace and vest. The other dude was wearing a silver, ruffly satin jacket that was probably part of some bridesmaid dress from the 80s. He also had a Lorax tattoo that featured a Truffla tree and the quote ‘I speak for the trees.’

From the moment they took up residence near me I was annoyed. It was like insta-annoyance and I could not hide my disdain. Every ounce of my cosmic energy was screaming “ARE YOU FUCKING KIDDING ME?” at them.

Was it the very obvious patchouli stink? The offensive head gear? The motherfucking hoola hoops? All of the above?

I wasn’t sure, and I’ve spent the past forty-eight hours trying to discern why I was so annoyed. I think it’s obvious that my reaction is more about me than it is about them. So what the hell is my problem?

Well, to begin with the hoola-hoops. Rock the Garden is not a hippie-type, hoola-hoopy event. At least not this one that I attended. The hill was crammed with people, the grass was wet, slick, and muddy. You need a lot of space to hoola-hoop, and frankly the space wasn’t there. That did not stop the Faux Hippies. If I had $1 for each person who was hit by a hoola hoop, I could get us all tickets to next year’s rock the garden.

Now that’s not to say my offensive Faux Hippie friends were not great hoola hoopers. One of them was really good, and when I could let go of my hate enough to just go with her flow, I sort of enjoyed watching. I might have enjoyed it more if any of the music at Rock the Garden was hoola-hoopesque, but the rhythm was off. So there was always a weird sort of discord or dissonance. Also, people trying to hoola-hoop to Bob Mould and Metric look ridiculous. It’s just not right.

So are their crimes against fashion, rhythm, and taste enough to merit such a reaction? Probably not, but damn I was just so fucking annoyed.

Their obvious and annoying ploy for attention drove me bonkers. They reeked of patchouli & look at me. And I’m not kidding about the patchouli, I had two friends stop by to chat and both commented it. And I wasn’t the only one annoyed by their schtick. All the people within a five-foot radius of me complained. At one point a hoola-hoop broke and a small cheer went up from the six or seven people directly behind me. This was followed, not 20-minutes later, by a groan of despair from the party next to me when she fixed the busted hoop with a sticker.

At one point I was so happy not to be alone in my disdain that I wanted to go all hippie and hug the people around me. We were united as one in our annoyance and that made me feel moderately better for hating on the Faux Hippie Hipsters.

I’ve chalked up my reaction as intolerance to a way of life I cannot understand. I don’t get look-at-me-ism.

As a large, freakishly-tall woman I have spent most of my life hoping people wouldn’t notice me. The points, stares, questions, bug-eyed-reaction to my appearance embarrases me and makes me uncomfortable. When I am out in the world I want nothing more than for people not to notice me. It rarely happens. Half the reason I got tattoos was to give people something to talk about other than my size (the other half was that I wanted them).

So, I don’t understand why someone would want to call such attention to themselves. I don’t know what they get out of it, and frankly, at an event where the attention is supposed to be elsewhere it seems rude to start a sideshow, and that’s what this was, a sideshow.