And you’re all, what? That’s totally true. 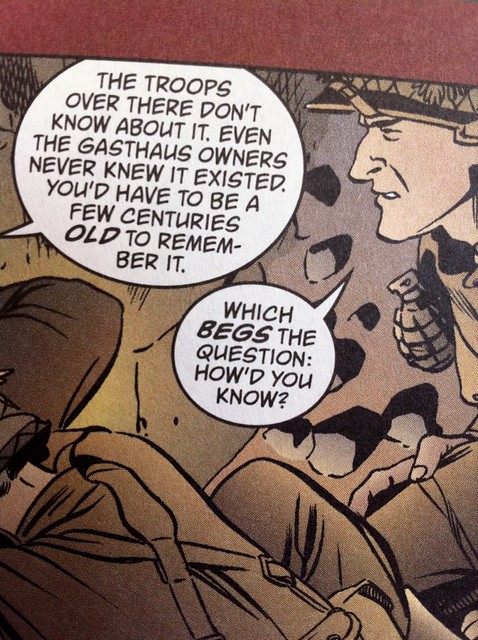 From the comic book series “Fables” another improper use

But I am an annoying pedant because improper use of begs the question drives me right up the wall. In fact, it drives me so batty that it has overtaken the overuse of douche to claim the #1 spot of weird linguistic things that annoy me.

I don’t know if begs the question has just gotten more popular or if I have some sort of superpower bat-radar hearing that seems to catch its use no matter where it occurs. It’s one of those things that once you start noticing, you can’t stop it. It’s like when you see dead people and all of a sudden you’re saying, “I see dead people. They’re everywhere.”

Why does this drive me so crazy? There are two reasons.

First, people have no idea it actually means something that is not “raises the question.” They think they’re being clever or offering up some witty turn of phrase. It’s not that the language has evolved and the phrase has moved past its original meaning, it’s that people are dumb.

Second, I learned what begging the question was the hard way. You have to harken back to the long ago 90s in a cold, dank lecture hall on the UWEC campus. There, a young nerd, sat in the upper left corner in Logic 101 (or one-oh something, I can’t remember what) and tried with every brain cell she had to learn logic.

I’m not exactly sure what possessed me to take Logic. It was, after all, my very first semester in college, so I’m sure my options were limited. I liked the idea of taking a philosophy class and having no idea what philosophical logic was all about I signed right up.

Some part of me probably thought I’d learn to be logical, to have more common sense. In all of my eighteen years up to that point i had often been shamed for my lack of common sense.

Sure I once asked my mom after pondering a sign at the laundromat why she didn’t use the machines that offered to wash, fluff-dry, and fold your clothes for only 65 cents a pound. Sure, I was seventeen at the time, but come on, I’d seen the Jetsons. And I asked my dad if olives were invented in a lab using chemicals, but that’s probably not far from the truth.

But to my family it meant I lacked common sense.

Somewhere in my common nonsense head I decided Logic would give me sense. It did not give me any common sense. However it did teach me a lot about arguments; if/then/therefore statements; Venn diagrams, how my philosophy professor used logic to argue his way out of a parking ticket (which had something to do with the ridiculousness of having motorcycle only parking in Wisconsin in February); and what the hell it means to beg the question.

So I beg you (and not the question), just stop using it. You can still ask questions, raise questions, even bring up some questions, just don’t beg them. Okay?