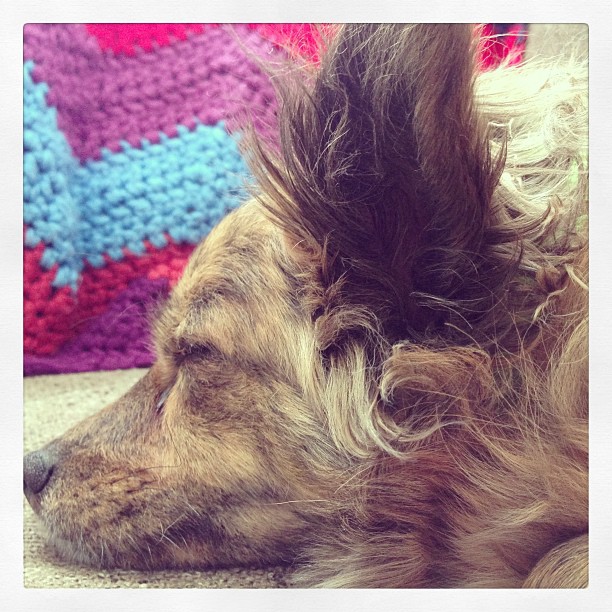 So I got up at the crack of 8 a.m. which is much later than I wanted to get up but two days of getting up at 6 a.m. takes toll on a gril who likes to not get up that fucking early, but, you see, Walter the early-rising dog loves 6 a.m.

So I took Walter out ASAP because he really had to go and I really had to get going if I was gonna make it home in time for “Meet the Press.” I only swore in my head a little bit as he sniffed around for the proper blade of grass to piss on. Here’s the thing dog people, I don’t get you. Where do you find the patience to stand around in the freezing morning while the dog searches for just the blade of grass/tree trunk worthy of their pee? I don’t have that patience. 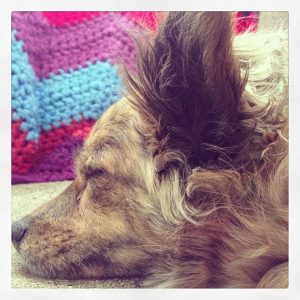 So I ran to get groceries and I ran to get coffee and when I returned home with two minutes to spare, I was greeted by an upended garbage can in the middle of the kitchen and a Walter who was bouncing off my legs he wa so happy to see me. After all, it had been an entire thirty or forty minutes since I left.

So I was all “Dick move, Walter. I hope my scorn was worth the empty cheese wrapper, asshole.” After cleaning up and putting everything away, I settled into the couch with coffee and David Gregory and bunch of old white dudes wonking on about terrorism and Boston. Senator Dick Durbin (R-IL) had the audacity to say that if we do nothing about immigration in the light of what happened Boston we will be less safe. Doing nothing about background checks for people who want to buy guns though? He’s hunky dory with that. Asshole. Frankly, I am more afraid of a white loony dude with a gun than I am of anything else that might harm me. White loony dudes are the ones who walk into movie theaters and schools and start shooting stuff up. So yeah, bite Durbin.

So after that I had to bust a culinary move. Since Sister #2 & fam are at Coachella (hence the quality Walter time), I was hosting Family Dinner at Supergenius HQ for Sister #3 & The Tibbles. The menu? Green chile cheese chicken enchiladas, Spanish rice, and brownies for dessert. It was delicious. Nolan loved it so much he had thirds. As the chicken breasts were baking I sat on the couch and watched a documentary about Fleetwood Mac’s “Rumours.” While the Heart obsession has quieted, the Stevie Nicks one is still going hot & heavy.

So then I spent a litte time cleaning up the joint. My house is a mess. You know that. I’m a horrible housekeeper.

So after all this enchilada rolling and house de-furring I decided to spend a little alone time in the bathtub with Sarah Vowell. It was delightful, mostly because it meant that there was not some furry being touching me. This weekend could accurately be called Occupy Jodi’s Lap. If Walter’s not snuggling up to me, then Paco is. They are, I’m pretty, sure the neediest animals on the planet. At certain points throughout the evening, I will have on the animals on my lap and one at my feet. Maybe I’m a cold-hearted bitch but this is entirely too much togetherness for me.

So then it came time to make the Spanish rice and begin re-watching Buffy again. I had been rewatching Buffy between bouts of cleaning and brownie making and dishes putting awaying. This really is the most boring Sunday ever. I think it’s because I’m super tired. My sleep is all jacked up this week with a heavy, early-rising dog. And I’m like a three-year-old when it comes to sleep. I need a lot of it and on a pretty set schedule or I’m a beast. Yesterday was beastly, today it’s just boring.

So once The Tibbles & Sister #3 arrived, she threw them outside with Walter because they’ve had entirely too much togetherness this weekend. While they were gone we talked about my ROKU box. When they arrived home I thought we’d have a nice dinner at the diningroom table but instead they begged to watch some stupid Tinkerbell movie and I caved. Then they left and now I am yawning and typing and thinking about having one of those brownies I made.

So, yeah. More boring than usual. Also I started every paragraph with ‘so’ on purpose.