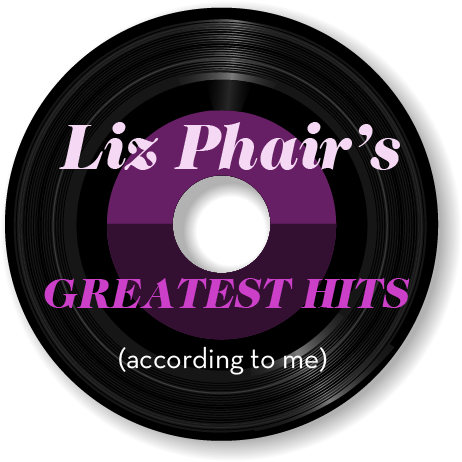 I was gonna celebrate Liz Phair’s birthday by being all ‘voice of my generation’ and declaring her the sound of Gen X’s sexuality, specifically the women of my generation. Then I thought about it for twelve more seconds and realized that would be a shitty, heteronormative thing to do. Besides, what do I know about anyone else’s sexual journey? Bupkis, that’s what. So instead I’ll just be the voice of me and say that around these parts she’s known as La Liz, Patron Saint of Sexuality. And by these parts, I mean mine.

Over the past thirteen years on I Will Dare (aside THIRTEEN YEARS!) I’ve probably spilled as many pixels about Liz Phair as I have about Paul Westerberg. They’re my biggies. They’re the artists whose music I cannot discuss with any degree of rational thought or without tears. And yet, here I am making a list of Liz’s Greatest Hits where I will try to find adequate words to convey the greatness. I will probably fail miserably, but I will try. Afterall, it’s Liz Phair’s birthday and it’s the very least I can do for the woman who wrote the songs that have embedded themselves into the very core of who I am.

If’n you like you can listen to this list on Spotify, or most of the list. The acoustic version of “Why Can’t I?” Isn’t included because of shitty DRM. Also, I would just like to add that I have some 200+ Liz Phair songs in iTunes, making this list was a bitch

From “Exile in Guyville”

First you should note that this record is going to turn twenty in June. TWENTY. We’ve had “Exile in Guyville” for TWENTY YEARS. Hallelujah!
6’1″: Side 1, track 1, how could I resist? And I say side 1 like I ever had this on vinyl and not on CD. I do, however, have “Whip-Smart” on vinyl and if I ever get a record player I will play the shit out of that albums. Also, I often sing this as “and I kept standing 6’1″ instead of 6’5″” even though it doesn’t rhyme.

Fuck & Run: This is probably the iconic Liz Phair song. It was the song twenty-two-year-old me identified with hard. I wanted a boyfriend. I wanted all the stupid old shit. Forty-year-old me sees this song as charming in a sort of archaic way, because forty-year-old me know that I am the “Fuck and Run” type and not the wanting a letters and soda type. Things change.

Divorce Song: 1994? 1995? Driving in Anderla’s Accord that her parents decked out with a CD player, smoking cigarettes, twisty Eau Claire roads in the late spring. Youth and unearned bitterness and frustration and friendship. This song is all those things.

Flower: This song. I can’t even. It sounds like discovering the joys and powers of sex. At least this is what my experience of that sounded like.

I’ve listened to this album hundreds of times. That’s not exaggeration. “Whip-Smart” along with Matthew Sweet’s “100% Fun” was the soundtrack of every single word of fiction (and much non-fiction) I wrote from about 1995 until February.

Supernova: “Your kisses are as wicked as an M16, and you fuck like a volcano and you’re are everything to me.” A very smart ex-lover used this song to describe me and my ego has never forgotten it. Neither will you, now.

Shane: This is included purely for that exhalation of breath at the very beginning of the song. It makes my heart knock against my chest.

Jealousy: First, yes this song does appear on “Whip-Smart” but I wanted to include something off of this EP just because it was really hard for me to get. There’s also a cover song later on the list and so I couldn’t also include “Turning Japanese.” So this song, yeah, it mentions hips and I’m a sucker for those kinds of songs.

Perfect World: Embarrassing confession #1: Back in the early aughts when I used to date all the time I had a profile on various dating sites. The headline was often some variant of “Cool, Tall, Vulnerable & Luscious” a play on a line from this song. Liz wants to be tough, I am tall. You get it. Do you want to die of embarrassment for me? I kind of do. Incidentally, and somewhat related, I realized that I stopped (for the most part) dating once I bought Supergenius HQ. I need to examine that bit of navel at some point. Embarrassing Confession #2: That acoustic guitar squeak thing (featured throughout this song) is like an aphrodisiac to me. Instant lady boner type thing.

Polyester Bride: This song came out when I was twenty-six and working at a gas station. It was a low, low time filled with Internet addiction and depression. There was something oddly hopeful in this song, the whole you’re lucky to be alive, you’ve got time thing. I clung to this song like a life raft. It buoyed me when I needed it and a year later everything changed for the much much better.

Baby Got Going: Mostly for it’s inclusion in the movie “High Fidelity.”

Now a lot of music snobs are rubbing their eyes and being all “What? What? Songs on this one albums after Whitechocolate and/or Whip-Smart? This is bullshit nonsense.” And to those snobs I say step off haters, pop Liz is not such a bad thing, but I can admit some of the songs on this one are an embarrassment.

Extraordinary: This song got me through a particularly nasty breakup in 03 or 04, I am too lazy to go look up the specifics. It came along at a time in my life when I needed to feel that I was worthy. Losing out to a woman you didn’t even know you were competing with can be quite damaging to the ol’ self-esteem.

Rock Me: If I hadn’t read a few totally shitty Chuck Klosterfuck piece from 2003 issues of SPIN last week this song wouldn’t have made the cut, but then he was being such a dick about the evolution of Liz’s music and how she portrayed her sexuality through it that I included this as a sort of karmic fuck you to him. He is seriously the suck. In one article he talked about her distracting her miniskirt was and then had the audacity to ask her if she exaggerated her sexuality for artistic purposes. Dude is such an ass. Phew. I feel better for having gotten that off my chest.

Why Can’t I?: The version on my playlist is acoustic from some iTunes session. This is a great song about having a crush, probably one of my favorites, and it helped me get over that aforementioned breakup. The way she sings “Here we go we’re at the beginning. We haven’t done it yet, but my head’s spinning” perfectly captures that pre-sex stage of a relationship.

This is probably my least favorite of Liz’s oeuvre. I don’t mind poppy Liz, but boring poppy Liz? Not my thing. This album doesn’t do much for me at all. However, I do like one particular song.

Got My Own Thing: I like this song because it feels to me Liz has come to terms with what it means to be Liz Phair, the voice of some many Gen X women and the pin-up girl to so many men who don’t really understand what she says but like it when pretty girls say fuck. Those dudes suck.

This was that weird-o basement tape sort of record Liz put out a few years back. It’s bizarre.
Bollywood: This one makes the list more for what it says than what it sounds like it. Basically, it’s about getting the rights back to the songs on “Exile.” I can only imagine how empowering that would have been.