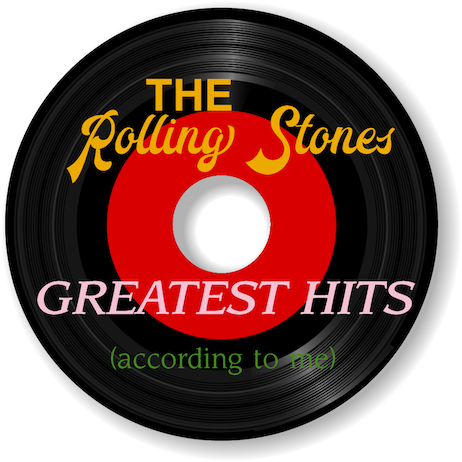 My friend Hotrod is looking for a fight, so I made this list. You’d think after all these years he’d tire of me always putting him in his place, but he’s not.

A few notes:
You won’t find “Sympathy for the Devil” here because songs over five minutes bug the crap out of me, even ones by The Rolling Stones.

Also, I just want to say I really hate “Angie.” Like, I really really hate it as if it were written by the Barenaked Ladies and performed by No Doubt.

Finally, I was lazy and undisciplined and included many songs from the same album/era. Suck it.

So here, in no particular order, the Rolling Stones’ 10 Best Songs According to Me.

When it comes to the Stones, depending on my mood, I will answer with “Dead Flowers” or this one.

Rocks Off
I’m not generally a fan of the drug songs. Drugs don’t appeal to me or amuse me or fascinate me at all. That being said, I will take all of The Stones’ drug songs over any of The Velvet Underground’s drug songs. Confession: I do not like The Velvet Underground and I will not apologize for that anymore. This one makes the list because of “the sunlight bores the daylights out of me.” I love word play like this (see: love of Paul Westerberg).

Beast of Burden
This is a sentimental favorite because it makes me think of my friend FFJ. Confession for more years than I care to admit, I thought the lyrics included the line “suck a duck” and I thought that stupid, nonsense line ruined the song.

Miss Amanda Jones
This one wins because of that fabulous little drum fill at about 1:16 and the lyric “she looks quite delightfully stoned,” which makes me laugh. Also, its use in “Some Kind of Wonderful” even though Drummergirl was where it was at and not at all with Amanda Jones.

Shattered
The reason I love this one is pretty stupid, but, well, here it is: I like all the shatter, chatter, matter, tatter, batter rhyming. I bet Dr. Seuss loved the hell out of this song. Also handclaps.

Under My Thumb
Yes, I’m a feminist and yes I still enjoy “Under My Thumb.” Some people might find this contradiction worrisome and those people can shove it. First, Rock & Roll in general is misogynistic. I get that, and thanks to my deity of choice (Ellen Willis in case you’ve forgotten), I’m starting to learn how to intellectually reconcile the misogyny in songs I love with my feminism.

I go easier on songs where you can easily change the ‘she’ to ‘he’ and get the same damn song. That works with “Under My Thumb.” And, really, let those amongst us who’ve never been in an “Under My Thumb” situation (as either the thumb owner or the one under it) cast the first stone.

This one wins because of that baseline. Also handclaps. Also marimba. (bonus points for being used in the Scott Pilgrim movie)

Wild Horses
You have to be made of stone with a McNugget for a heart not to be affected by heartbroken Mick’s plaintive “No sweeping exits or off stage lines, could make me feel bitter or treat you unkind.”

Dead Flowers
Even I can concede that this is not The Stones’ best song, however it is still my favorite. There’s just something about the tension between the heroin-y lyrics and the country music with Jagger’s weird not quite fitting in with the song vocals.

(Visited 80 times, 1 visits today)
Greatest Hits According to Me The Rolling Stones

@brainbliss It’s on week nights at 8!

@brainbliss My fam & I have had many in-depth conversations on strategy & we spend a lot of time googling if certain brands are still around. Holidays here are SO fun.

@brainbliss I STILL contend that. I’m not kidding when I say I watch it every day. Thank you, Buzzr!