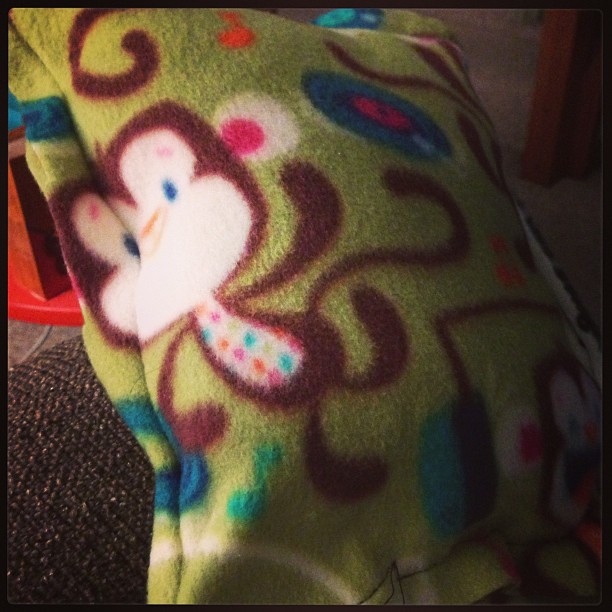 “Aunt Jodi, close your eyes,” Cade shouted as I walked up the stairs at Sister #2’s house.
“Okay.” I stood in the middle of the living room with my eyes clothes. Walter jumped against my calves in desperate need of Aunt Jodi time since we had cancelled last week’s Family Dinner due to inclement weather and sickness.
“I guess you don’t need to close your eyes.” He walked over to me with his hands behind his back. “I just made you something,” he said and popped a glorious Rock & Roll Monkey pillow into my hands.
“I love it,” I screeched. “This is so awesome, Cade.”

He smiled at me and nodded in the cool way that eleven-year-old boys show their approval.

If Walter and Liam hadn’t jumped in my lap the moment I sat down, I probably would have burst into tears. But the dog and the little boy missed the hell out of me, but only Walter would admit it.

For his birthday last month Cade got a sewing machine he calls his “stitcher,” a whole bunch of fleece fabric, and a two-pound bag of poly-fiber-fill. It was the right gift for the right kid at the right time and seeing what he creates has been nothing short of magical. So far he’s made pillows for me, Liam, and Sister #2, two sweaters for Willow, his cat, and a pair of Vikings-socks.

The pillow is probably one of the best things anyone has ever made for me. It sits up there with the candy dish Jaycie made me, the “weed box*” Maxwell made me, and that song that one guy wrote for me for my twenty-sixth birthday (the words to which I can no longer remember).

*the weed jar is a joke that comes from an old SNL skit featuring Rob Schneider and a green jar a friend made for me in college. When Jen gave me the jar (which I still have and keep next to Maxwell’s box) two of my more stoner-y friends kept joking about how “you could put your weed in it.” Perhaps you had to be there. In 1994.