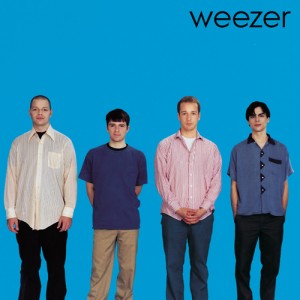 Now that the weather has gotten slightly chillier than it was before, The Tibbles have totally conned me into giving them rides to school. This is not because they want to spend more time with their beloved Aunt Jodi. No, it’s because Aunt Jodi is a sucker and if they get a ride to school they get five or six more minutes of Minecraft time.

This morning after we all piled into Ruby and buckled up, The Current started playing Weezer’s The World Has Turned and Left Me Here. For some reason I decided that this very morning was the time for my young nephews to understand just how much Weezer meant to me once upon a time ago.

The world has turned and left me here. Just where I was before you appeared. And in your place an empty space, has filled the void behind my face

I started singing the song out loud before I even put Ruby in drive.

“I love this song so much,” I shouted over the music.
“We can tell,” Nolan, who was stuck in the middle, said.
“This whole album, Weezer’s Blue Album, was one of my very favorite records when I was in college,” I said, ignoring the smartypants.
“When you were in college?” Cade asked.
“Yeah,” I said. “We would listen to all the time in the newspaper office. I think everyone loved this record.”
“So, like you listened to this when you were in college?” Cade asked again.
“Yeah,” I said.
“Wow,” he kind of gasped. “This song must be really old. Probably from the 90s.”

That’s when I pulled over and made him get the hell out of the truck. But only because we were already at school. They don’t live very far from their school.

Things were better then. Once but never again. We’ve all left the den. Let me tell you about it.

After they were out of Ruby I continued to have warm, smooshy, nostalgic feelings about Weezer’s Blue Album. I mean, when’s the last time you thought about the Blue Album? Or, you know, Weezer?

The last time I seriously thought about Weezer was when the young, beautiful Grad (remember him?) told me he was in fifth or sixth grade when he first heard the Blue Album. I think it was probably that one sentence that turned me from like a regular thirtysomething into a cougar. I was advanced for my age. Now that’s I’m forty I’m just regular cougar age, right?

Enough about cougardom, back to Weezer.

Of all the records in my canon of Personal Artifacts none of them make me feel quite so dated as this one. Not Matthew Sweet’s “Altered Beast” not “Exile in Guyville” none of The ‘Mats, not even Pearl Jam’s “Vs” (which hasn’t yet secured its place in the canon).

Here’s why, the Blue Album represents a very definite point in my life. It is that last yearish of college. It’s those people and that time and very specifically a night at The Spectator office when my friend Whitley and I were trading off singing lines from “Buddy Holly” and one of the other editors accused me of being mean when I sang “Oh oh and you’re Mary Tyler Moore.” Because, well, Whitley looked like a grungier modern Mary Tyler Moore and this editor, I can’t remember who it was, thought that was a slight. Whitley and I laughed for about six years picking on whomever that person was who was so uncool as to not know all the words to “Buddy Holly.” In that person’s whom I can’t remember’s defense he/she took the teasing pretty well and thought that I was super clever working in Mary Tyler Moore into the song.

There are other albums that nail me to certain points in time or certain people. For instance, I discovered this weekend that Teagan & Sara make me feel thirty again. Exactly thirty and how I felt when I was sleeping with that one guy I slept with when I was thirty. For the record, I don’t burn with shame about it anymore. Apparently I have forgiven myself for being a bitch.

But there are two thing about those other albums and Weezer’s Blue Album. A lot of them I have carried with me throughout my life. A lot of those album has become timeless, simultaneously reminding me of specific point in time and yet not being rooted to that time forever. They’ve become more than what the were.

Weezer’s Blue Album hasn’t transcended it’s place. It will always be that year in college, that night in The Spectator office. It will never be anything more than that, which is okay. Being that year is enough.