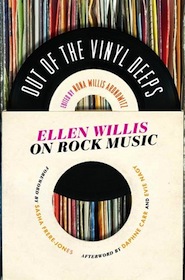 I’m lit from within with the beatific joy that comes when you discovery your deity of choice. My deity is called Ellen Willis and she was a writer who worked as the first popular music critic for The New Yorker. My bible (thus far) is Out of the Vinyl Deeps.

Like any recent convert I’ve gone on a mission to get those around me to open up their hearts and let Ellen into their lives. I’ve done a very poor job of trying to convert others around me. I say poor because I’m still so new in the light of the glow of the joy or whatever, that I can’t quite properly explain why my way is the one true way. I usually just say things like “amazing” and “changing the way I listen to music” and “so good.”

PEOPLE! You know how I have spent the last kajillion years searching for a female perspective on Rock & Roll? You know how I have begged everyone to suggest something that would tie in feminism and what it means to be a woman and a fan of rock music? Well I found it and it was very nearly everything that I had hoped it would be. The only way it could have been everything I hoped it could be is if Ellen Willis were my contemporary, someone born in 1972 and not 1941. If she were writing about music today, the music I’ve experienced in my life. But then, I suppose, most sacred, religious texts aren’t about the here and now. They’re about the then and there.

Today when I was writing about this book on MN Reads I mentioned that it was hard to explain what the book meant to me and what it was like to read it without breaking into tears. Reading it filled a hole in me that was much more profound than I thought. Ellen Willis’ writing put a social, cultural, and, most importantly, feminist perspective on Rock & Roll that my soul needed. I didn’t realize how much, until I now.

Here is a little bit from the holy text:

No, all I ask of The Beatles is a little taste. When Bob Dylan renounced politics, he also renounced preaching. “Revolution,” in contrast reminds me of the man who refuses a panhandler and then can’t resist lecturing him on the error of his ways. it takes a lot of chutzpah for a multimillionaire to assure the rest of us, “You know it’s gonna be all right.” And Lennon’s “Change your head” line is just an up-to-date version of “Let them eat cake”; anyone in a position to follow such advice doesn’t need it. pg 81

The male-dominated counterculture defined freedom for women almost exclusively in sexual terms. As a result, women endowed the idea of sexual liberation with immense symbolic importance; it become charged with all the secret energy of an as yet suppressed larger rebellion. Yet to express one’s rebellion in that limited way was a painfully literal form of submission. Whether or not Janis [Joplin] understood that, her dual persona — lusty hedonist and suffering victim — suggested she felt it. Dope, another term in her metaphorical equation (getting high as singing as fucking as liberation) was, in its more sinister aspect, a painkiller and finally a killer. Which is not to say that the good times weren’t real, as far as they went. Whatever the limitations of hippie rock star life, it was better than being a provincial matron — or a lonely weirdo.” pg 126