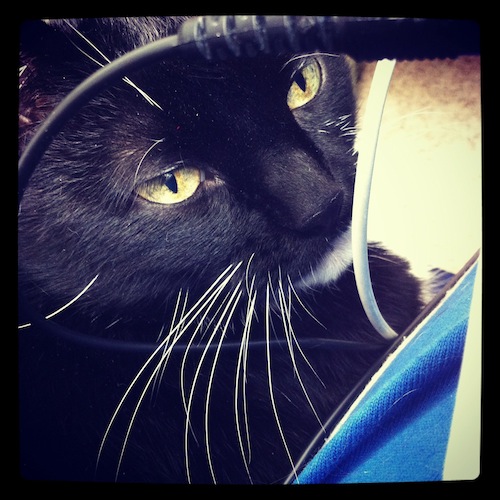 Ever since Walter the dog left two weeks ago, Paco, my one remaining cat, has been needy as fuck. He’s always been a needy, demanding cat. In fact, he’s quite aggressive in his neediness. His latest trick is to plant his ass right next to me on the couch (as seen above), casually creep his way onto my thigh, and then he’ll try to wedge his head between my fingers and the keyboard. It’s annoying.

This has been happening pretty steadily for the past two weeks. The only respite from these kinds of shenanigans is if I throw a blanket over my feet. Paco will drape himself on top of any blanket that’s over my feet. This is his most charming trait, especially in the dead of a Minnesota winter.

This behavior makes me kind of uncomfortable. It’s not that I don’t want Paco to enjoy self-pleasure or whatever it is he’s doing. I just don’t want him doing it right next to me (and on one awkward occasion while I was trying to nap through “Dance Moms” right on me). Also, this is my favorite blanket and I don’t want him getting any sort cat bodily fluids of any sort on it. That probably sounds pretty selfish but there’s about 923,281 other things he could hump in this house. 923,280 of those things don’t reside right next to me 75% of the time.