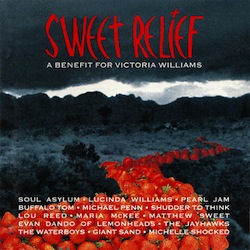 I woke up this morning singing Soul Aslyum’s cover of Victoria Williams’ “Summer of the Drugs” which got me thinking about how fantastic the Sweet Relief compilation is. Do they still do this, get a bunch of awesome bands and singers together to make what is, essentially, a professional mixtape? Or were the early to mid-90s just the heyday of such gloriousness?

Think about it No Alternative, Home Alive, and If I Were A Carpenter (which I don’t think was a benefit for anything but just for fun), along with Sweet Relief all came out in a three year time period. In my misty, rose-colored memory these albums were pretty big deals. Or at least they were a big deal to the people who wandered in the same music circles I did.

And why wouldn’t they be a big deal? If you take a look at some of the track listings you’ll see songs sung by some of the biggest names of the 90s Alternative Nation: Nirvana, Pearl Jam, Matthew Sweet, Soul Asylum, Bob Mould, Soundgarden, I could go on and on.

I have them all. Of course. But I think my favorite will always be Sweet Relief. I don’t know if it’s Victoria Williams’ writing that I dig so much (though I’m not familiar with her versions of these songs) or if it’s the line up. All I know is that this album is full of awesome from beginning to end, so much so that I even tolerate the appearance of Lou Reed. I know, I know, it’s blasphemy but Lou Reed with or without The Velvet Underground just doesn’t do much for me.

It kicks off with the aforementioned “Summer of Drugs” about missing out on the love of the sixties but having the drugs when becoming a teen in the 70s. Then comes Lucinda Williams with “Main Road” which is just a sweet song about childhood and playing, but has the lyric “games turn into life, once a tomboy now a tomwife.” This line always slays me, especially the way Williams draws out the wife.

Third up is what many mistakenly think is the crowning jewel of this compilation, Pearl Jam’s cover of “Crazy Mary.” It’s haunting and really plays up that sort of croaky quality of Eddie Vedder’s voice. This is one of those songs I should have included in my songs that are like short stories list.

The crowning jewel is, in fact, well, there are two. Can we have two crowning jewels? Of course we can. One is Opelousas (Sweet Relief) sung by Maria McKee. It’s joyous and listening to it feels like driving fast with the windows down on a warm sunny day. The other jewel “Why Look At the Moon” by The Waterboys. It’s a real head-bobber/shoulder shrugger that includes croaking frogs. Even though I say these two are the jewels, there really isn’t a clunker on the album. How often can you say that?

I miss albums like this, these professional mix tapes. I’d scoop these up because of the big-name (at least to me) draws Soul Asylum, Matthew Sweet, and then discover new favorites like Lucinda Williams and The Jayhawks.

I wonder if an album like this would even work today. Is there a musical movement akin to the grunge/alternative/alt-country movement of the 90s? And, even more than that, would I even recognize it or care?