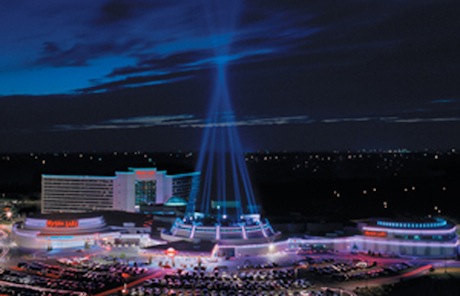 Most nights when I roll over to go to sleep I look out my window and talk to the Gatsby Lights. It’s like praying without the deity and the asking for help. If I could find a word as good as prayer without religious connotations, I would use it here. I looked and couldn’t find one.

The lights are from Mystic Lake Casino, which is about five miles down the road from Supergenius HQ. I love the lights and how when the clouds are low in the sky it looks like an alien spacecraft is about to land next door. I call them the Gatsby Lights because they remind me of the green light at the end of Daisy’s dock in The Great Gatsby.

Usually I talk about the day and what I liked and didn’t like and how tomorrow will be different. Sometimes when I’m blue I will sing “Let it Be” by The Beatles in my head until I close my eyes. When I’m really tired I just say “So we beat on, boats against the current, borne back ceaselessly into the past” and go to sleep.

Lately, I’ve been singing Bob Mould’s “See a Little Light” which kind of makes me laugh because, well, they’re lights. Of course my brain didn’t think of this little bit of funniness on its own. I’ve been singing the song for about a week now, and not just because it feels lyrically significant with my current, unsure, anxiety-filled situation. I’ve been singing it since I started reading Mould’s memoir See a Little Light: The Trail of Rage and Melody (incidentally, he’ll be reading from his memoir at 9 p.m. June 14 at Magers & Quinn).

Reading the memoir is a little like listening to someone you adore tell you a dream they had about you — there’s a lot of meandering to get to the good stuff. But that stuff, when you get there, is really good and worth the meandering. Of course, I say that now only 100 pages. Ask me again around page 300.

Right now I’m at the part where they’re recording Zen Arcade. Bob’s talking about how the record means so much more to fans than it does it him, because as a writer he felt and lived those thing in the moment but started letting them go the minute he wrote the songs. I loved that, because I’ve often had to explain the same concept to the readers of this here website.