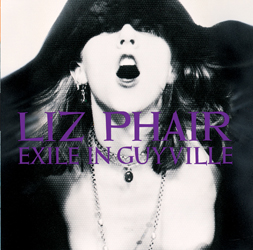 About half-way through the “Guyville Redux” documentary about the making of Liz Phair’s “Exile in Guyville” I became so angry I nearly turned it off. It was after the nerdgasms I had upon watching Phair interview Ira Glass and then John Cusack about the album (and the cusackgasm was even better because he had some sort of schmutz on his shirt, which just proved to me that he and I are soulmates, because I too always have schmutz on my shirt).

It was at that half-way point when I realized that she was not talking to any women about this album. None. At all. No women in the documentary about “Exile in Guyville?” ARE YOU FUCKING KIDDING ME?

I managed to talk myself down from the ledge for a bit because, I reasoned, maybe this is what the Chicago scene really was like, an odd boys only club. I mean, I knew that the Guyville the album is named after is that early-90s indie-Chicago scene. I knew that, but it still kind of bothered me that there was nary a woman to be found. I told myself that if this is the story then I have to just accept that no women at all were involved in the making of the record that awakened my sexuality and has helped me define who I am as a sexual being. Fine!

So even with my growing disappointment, I continued watching the documentary which really is seven kinds of awesome. I kept thinking about how I didn’t give a rat’s ass about what this album meant to a bunch of men. I started to get upset all over again, then horrified. Maybe all these penises didn’t realize how important this record is to women? Maybe they just don’t get it.

Then, just when I was gonna write Liz a scathing letter about how I couldn’t believe that she would make a documentary about a record that meant so much to so many women without including a single woman there it was.

And there I was, crying and remembering sitting in the front seat of Anderla’s Accord on Lowe’s Creek Road, a windy, wooded street that twists through Eau Claire. We were driving aimlessly, smoking cigarettes, and lamenting whomever it was who was breaking our hearts or not returning our affection. listening to “Divorce Song” and Anderla pointed at the CD player, “This is exactly how it felt.”

And there was Liz telling Ira Glass how she couldn’t listen to the record for something like seven years because it was all just too painful, how when she listens to it now all she can hear is what a scared, sad, angry girl she was.