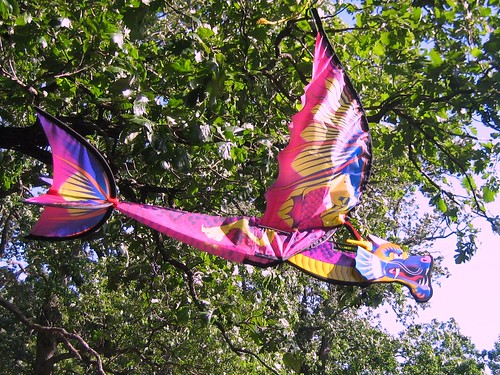 I had a brief flirtation with hippiedom in my college years. But then I realized I was made of bitterness and spite (and everything nice) and unable to convince anyone that I was all full of that peace, love and understanding nonsense. I was born to be opinionated, sassy, and judgmental.

So, Hippiefest was my first experience with real deal hippies in mass quantities. It was like I landed on another planet, the Planet Rainbow. The inhabitants of Planet Rainbow were in brightly colored tie-dyes and flimsy shoes. Many of the women sported fairy-wings and a lot of the men were clad in skirts. It was clear from my monochromatic attire that I was an alien.

They set up hobo camps complete with tie-dyed flags, twinkly lights, dragons, you name it. I was amazed by how well-decorated the hobo camps were. 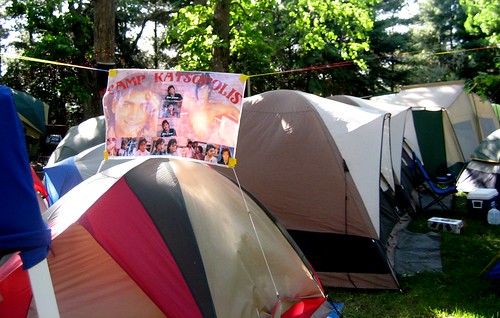 The thing about hippies is that they are about the most unintimidating, friendly people on any planet. There was more hugging and smiling then I’ve ever seen at any concert anywhere. All was full of love, seriously.

Throughout the day I had to resist the urge to run up and snap a picture of some of the more elaborately dressed hippies. Instead I just watched them with wide, starring eyes hidden behind sunglasses. I did, of course, give them all nicknames in my head. There was Jay (who was a dead-ringer for Jay of Jay and Silent Bob fame), Queen Guinevere, Sparkles the curly-haired tripper, and Old School Grateful Dead.

I studied the hippies like I was on an African safari. I watched them dance and shake and hoop. I watched them hug and laugh and pass the pipe. I came to the conclusion that hippies seemed to like a lot of attention. They would twirl their strange doodads, swivel their hoola hoops, or spin around in circles, and the entire time they were looking to see if anyone was watching them. That was weird.

It seems that no matter what the event, people want to see and be seen.

Of course my favorite hippie was the one who approached me as we were getting ready to go. Wolfdogg and I were outside of Bob the RV putting up the awning when a hippie couple approached us asking if we needed help.

The hippiechick told us how her parents had an RV and she watched them put it together and take it down all the time.

As I was putting up the awning, hippiedude came and stood next to me.

“Wow,” he said in the slow, lazy speech typical of stoners. “You’re really tall.”
“Yes, I am.” I turned to look at him and he was standing so close, his chin could have rested on my shoulder.
“How tall are you?”
“Six five.”
“Whoa,” he said. “That’s okay. I love you anyway.”

The hippies, they love all kinds.