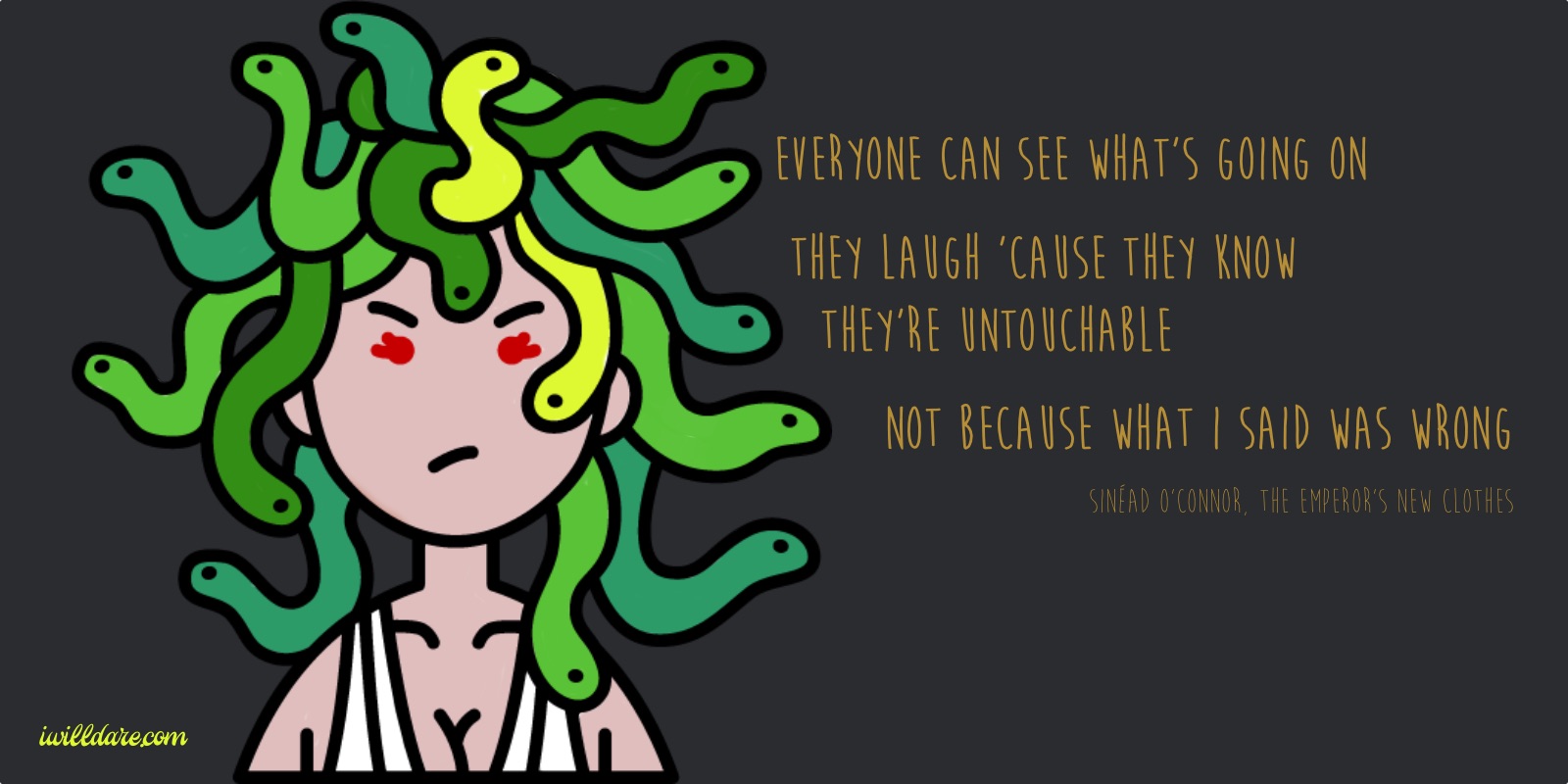 Today a man had the audacity to say something shitty, ill-informed, and stupid about women in music on Twitter and I had the misfortune of reading it. To say I lost my shit is an understatement. I burst into flames and my hair turned to snakes. I did not take this shitty tweet well, not at all. It doesn’t help that this tweet came on top of a week where all my twitter friends were listing their best/worst/first/loudest concerts and all the lists were full of dudes. Like most of the lists were JUST dudes.

Men think they value art made by women. They say they value art made by women. But when it comes down to it what they show is very different than what they tell. Their tweets are filled with chatter about books/movies/music made by men and about men. Every instagram post of a record they are “now playing” is by a man. All their favorite movies are about men, and aside from Donna Tartt, I bet they couldn’t name five women authors who are currently alive and have published a book in the last year.

It frustrates and enrages me to no end.

So what got the rage lasers all heated up when I as trying to nap? This numbskull who said right out in the open for all to see:

I am happy for Taylor Swift and Adele but I am from the era of Tori Amos and Sinead O’Connor. I miss when it was a female singer-songwriter’s job to scream at the sky and exorcise a 10,000 year old demon.

I am not entirely sure what point Louis Virtel is trying to make. Is it that he doesn’t care for the music of Taylor Swift and Adele? Is it that he misses 90s-era Tori Amos and Sinéad O’Connor? Maybe he wanted to jam his entire foot into his mouth and admit he has not been paying attention to music made by women in the last thirty years. If he really missed Tori Amos he could go listen to her brand-new record that came out in October of 2021.

While I cannot know the intent behind the tweet, I can know its impact.

To begin with he completely ignores or maybe he’s ignorant of the history of how women have been treated by the music industry. Perhaps he has no clue how many radio programmers refused to put music made by women into mass rotation because “they’re already playing a different girl.” One girl at a time. How about how some radio stations won’t play more than one song by a woman in an hour?

Once again we have a man telling women they’re doing art wrong, where wrong means not making art to his liking. We have a man who has decided that one form of female expression is more valid than another based on some mysterious standard most definitely define by men. We have a man gatekeeping what is cool and what is not. We have a man disappointed that, in his mind, for the last thirty years women have not been revealing their pain and turning it into art in a way that appeals to him. Goddamnit female singer-songwriters, why don’t you think about Louis’ entertainment?

What angers me the most is not even that he’s slagging on Taylor and Adele. They’ll be fine without his ears. They’ve got millions of dollars and fans to keep them warm at night.

What enrages me is he acts as though there are not women screaming at the sky & exorcising a 10,000 year-old demon through their music.

Excuse me, Mr. Head Up Your Ass. If that’s what you’re looking for might I suggest: Neko Case, Julien Baker, Mitski, Japanese Breakfast, Morgan Wade, Phoebe Bridgers, Lucy Dacus, Tristen, TORRES, Jensen McRae, Sharon Van Etten, Angel Olsen, Madi Diaz, Joy Oladokun, Waxahatchee, Jade Jackson. That should get you started. Do you need me to make you a mixtape? Also Liz Phair and Fiona Apple, both 90s rockers, have released amazing and vital albums within the last year or so.

The reason this whole thing is so enraging is that Louis isn’t a unique kind of sexist. Most men are. It’s how men have treated women making music since the inception of rock & roll.

Fucking Mediocre Men could you please fucking knock it off and stop trying to give me a fucking heart attack with your boneheaded nonsense.

P.S. Don’t you dare #NotAllMen me or I will curse you so hard you will spend the rest of your life suffering from minor inconveniences. You will never hit a green light again. You will stub your toe every time you walk past a piece of furniture. Your favorite flavor of potato chips will never be in stock again. All the papers will cut you. I am a spinster bog witch. You know I can do it.