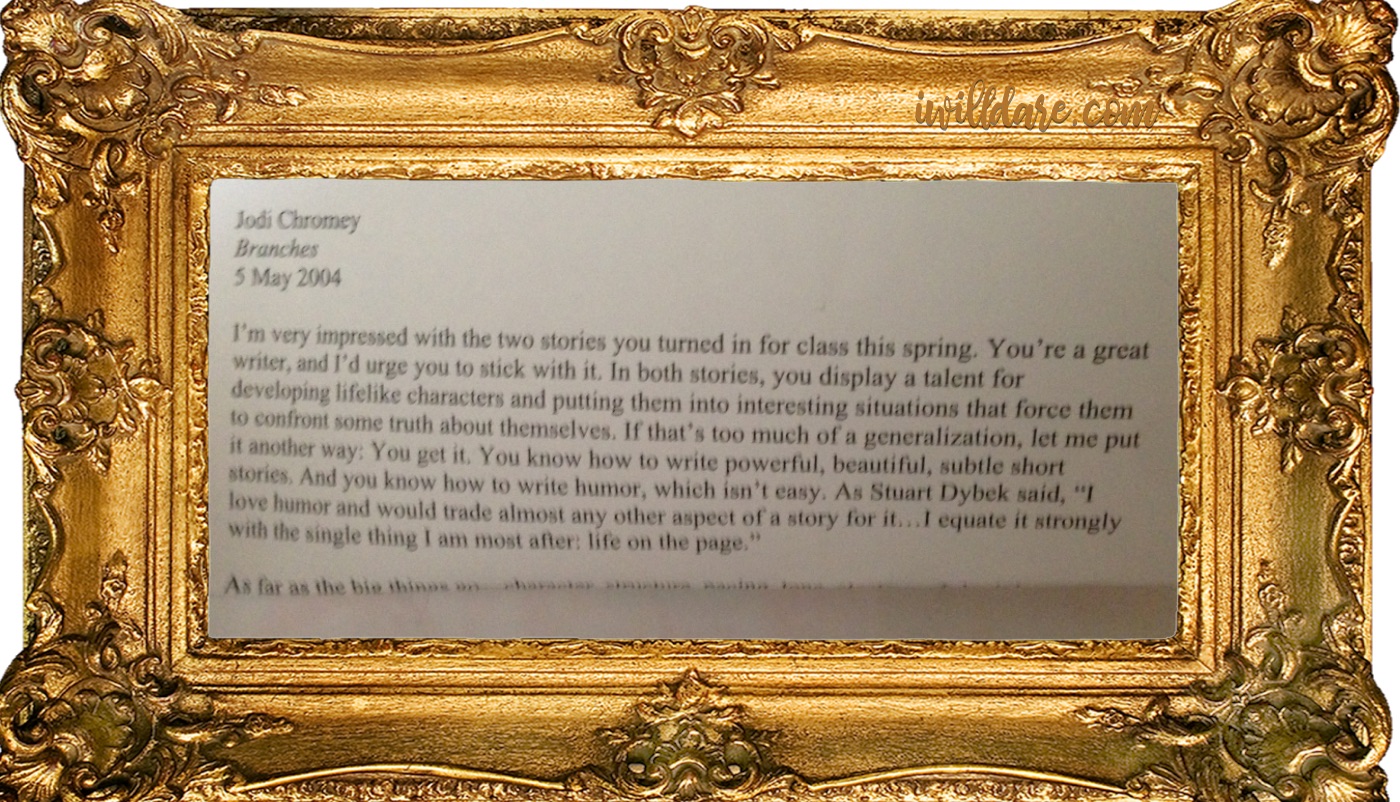 One of my Tea Lady friends is taking a class at The Loft, which means I got to share with them my all-time favorite piece of criticism I ever got.

It’s not the note pictured above. I’ll get to that in a second. I don’t think theres photographic evidence of my favorite thing ever written on one of my short stories. Instead, I just carry the memory of those scrawled words in my heart and pull them out whenever the opportunity arises.

The words were scrawled on my story by a kid I called Johnny the Greek because his name was John and he was of Greek descent. He was a young ad agency copywriter who took the same short story workshop some summer in the aughts. Johnny was not my biggest fan from the get go. I’m not entirely sure why he didn’t like me. Maybe because I’m a fat, sassy know-it-all and he did not like those kinds of women. Eventually, I won him over to #TeamJodi because I can be really charming when I try. Plus, he was an attractive man from Chicago. Even though he was not my type at all I still enjoy charming attractive men from Chicago. Man, it makes me feel like a woman. I don’t know, I’m reading a (kinda boring) book about the history of popular music and I just finished a section about Shania Twain.

Anyway, we workshopped my story before my charm attack on Johnny the Greek. I’m sure you can guess what he wrote in the margins of my story about a bowling alley:

“This story would be better if you were funnier.”

In my memory I laughed off this little bit of critical vomit right from the get go. However, I know what I’m about and I bet I sulked about it for at least a fortnight. Hell, I’m still kind of sulking over that shitty comment the mean lady left back in August.

Eventually, I got over it, charmed Johnny into going to Grumpy’s with us and we all lived happily ever after. Or we all lived. I have no idea what happened to Johnny the Greek after that class. We might be connected on LinkedIn or were at some point. LinkedIn is creepy and I’m unwilling to go check. I would do anything for love, Darling Ones, but I won’t do that. No. I won’t do that.

So, let’s get to the picture at the top of this post. It’s the first paragraph of a critique I received from Dale Gregory Anderson, someone who taught me a great deal about writing. I keep this image (sans frame) in the writing folder where I store my myriad drafts, false starts, and things I mean to finish.

I don’t usually gaze at the picture that often. I know it’s there. I know what it says. Usually that’s enough. But lately, Darling Ones, lately all I do is look at the picture. I look at it instead of writing. Looking at the picture is basically one step above laying on the couch watching the ceiling fan when it comes to my in a funk activities.

I’m floundering right now and feeling super insecure re: writing. I have convinced myself that my ice robot heart is incapable of the emotional capacity to write fiction. Who wants to read fiction written by an ice robot hearted spinster?