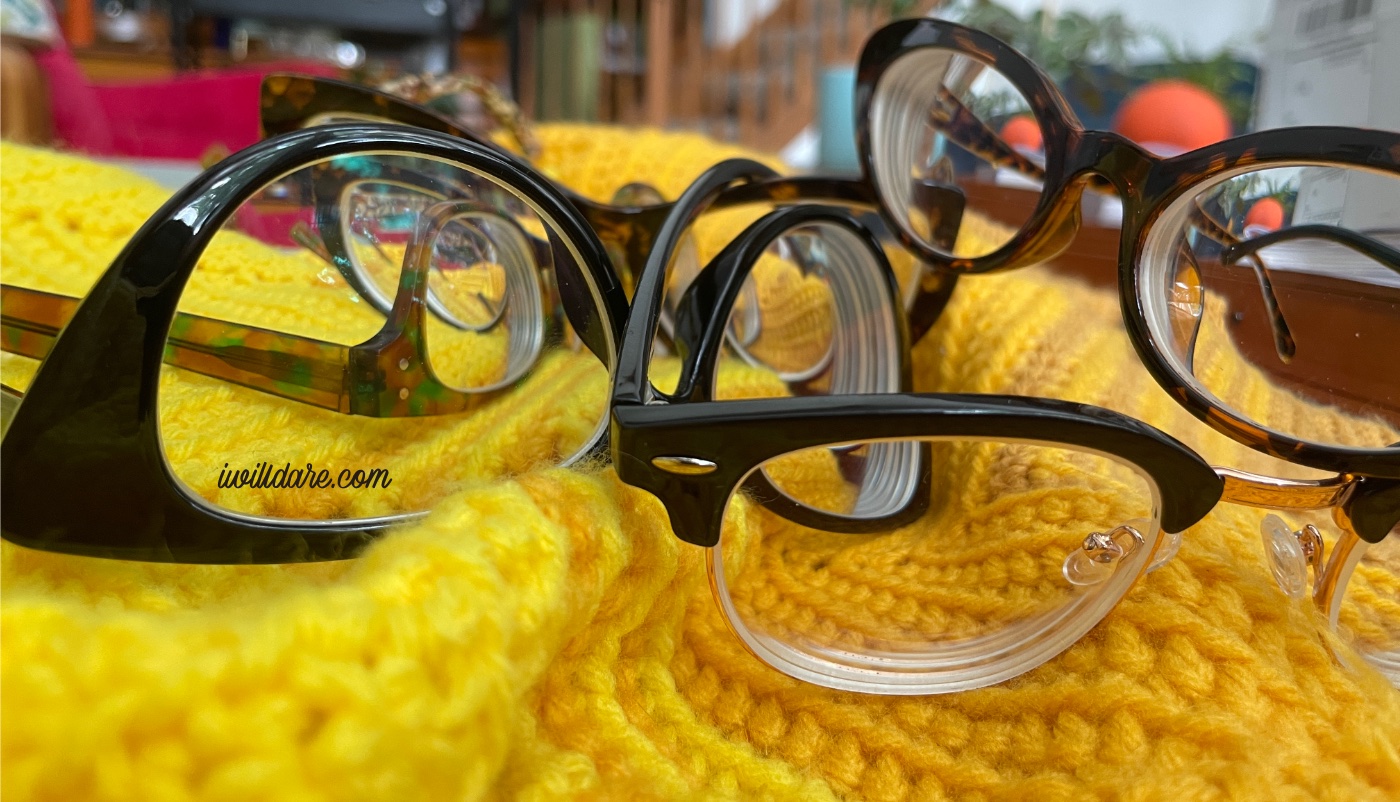 While I do have lucky, pretty eyes, they are not very good at seeing. I got my first pair of glasses* when I was in 8th grade. It only took a year of complaining about being unable to see for my parents to take me to the cheap glasses place in the Northtown Mall.

My eyes are the kind of bad that I have to spend extra-money on lenses, lest I walk around with heavy, Coke-bottle-esque lenses.

I’ve been wearing corrective lenses of some kind or another for thirty-five years, and for the first time ever I got new glasses and they broke my life.

While I was crowing about not needing bi-focals my eyes were all, wait until you get a load of what we’re gonna do to you. Here’s what they did to me: they made my laptop blurry.

For a few days I thought maybe I just needed to get used to the new prescription and spent a lot of time working really hard to focus on the screen. Do you have any idea how exhausting it is to concentrate all the time on trying to keep things in focus? Very.

It turns out that while I don’t necessarily need bifocals for close-up reading, I do need some sort of focals for computer reading. So fucking rude. It’s like my eyes weren’t shoddy enough so they had to invent a whole new level of shoddiness for fun.

All this got figured out a few days ago and I got some fancy near-distance progressies coming my way. In the meantime, I discovered that wearing my old glasses while working at the computer makes things sharp enough that I don’t feel like I’m losing my mind. I only discovered this yesterday, which is one of the reasons I’ve been oddly quiet this week.

The other reasons include having to think so much on a project I’m doing with a new client that I used up all my mental capacity and also a general malaise that might be PMS (which will super piss me off) or early-onslaught Augustness.

Darling Ones, I’ve been unfocused in more ways that one. Today I started the time clock to do something real quick for a client. It was something that was gonna take fifteen minutes. I started doing the simple task and must have got distracted in the middle of it. When I popped open Gladys’ lid this evening the time clock was still churning away at three hours and forty-eight minutes and I never even finished what I started.

There’s clarity ahead, I hope,
Jodi

P.S. I’ve spent a lot of time on the couch staring up at the ceiling fan while listening to The Rolling Stones’ “Sticky Fingers” on repeat and I just want to say from the umpteenth time that “Wild Horses” is the sexiest song ever recorded and number two is so distant I cannot even think what it would be.

*I’ve had the “he can’t see without his glasses” scene playing in my head since I started writing this.