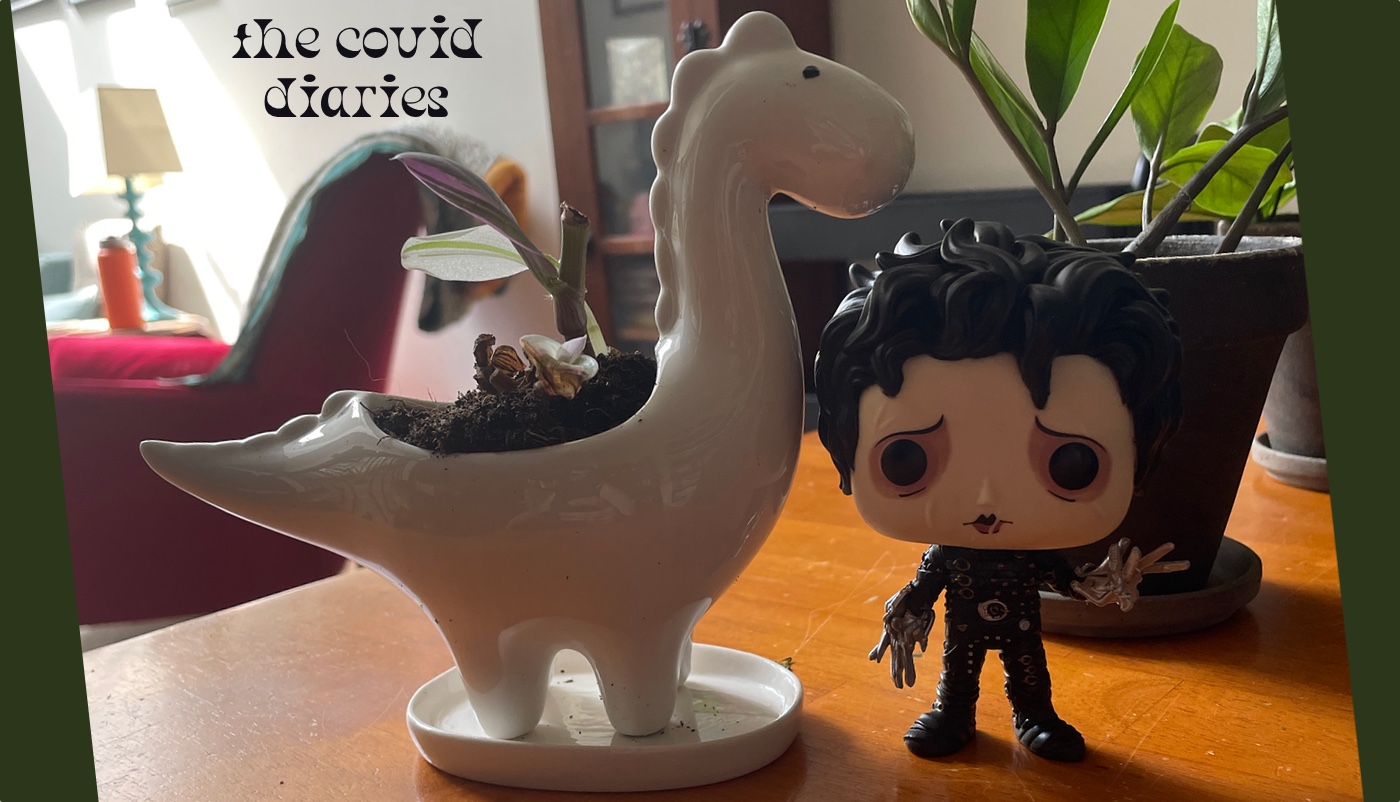 In the middle of my many and varied pandemic depressions, I ordered a tradescantia nanouk named Travis. I’ve mentioned him before. What I don’t think I told you is that the first one that arrived was dead. If I have told you this, forgive me. On day 389 of the pandemic I can’t keep my stories straight. At least that’s what I’m blaming it on.

Anyway, the poor little plantling travelled from wherever it was from to Supergenius HQ in the middle of that -16º cold streak we had. When it got here the leaves were all gross and soggy. It seemed pretty clear it was DOA. The place I got him from sent me a new one, obviously and now Travis thrives in the fecund Sadness Garden.

However, as you may know, I do not give up easily. Also, I’m a firm believer in magical thinking, specifically that I can make things happen through the sheer force of my desire. And, as my former boss Sandy, creator of the nickname Jodi Chromey Supergenius once said, “you have a knack for finding the unlovable and loving it.”

With all those dominant personality traits marching to the front I cut off the gross, sogginess of that poor plant and then I loved it. I loved it so hard and so throughly and so much that when it seemed to show signs of life I bought it an extra special adorable planter.

And I named it Dino. Look him grow!

In other news, Easter kicked my ass because my socialization muscles are so weak. The Olds & The Youths came for dinner, which was a duplicate of the meal we had for Christmas but with deviled eggs too. This time it was much better because nobody was sad. At least that’s what my dad and I decided.

After dinner we zoomed with the South Dakota and Portland contingents of the family. It was nice to tell my sisters how heavy my heart has been because every day TimeHop is an emotional landmine because of all the Cade stuff from last year and all the years before when The Tibbles spent their spring breaks with me.

At some point this week, I don’t remember the exact day, it will be a year since Sister #3 and The Tibbles unsubscribed from the Sister Club. I keep thinking it will get easier and easier, but it hasn’t. Sisters #2 & #4 deal with it much better than I do. Sister #4 is really good with her boundaries around what happened.

I still cry whenever I think about it and my anger at Sister #3 still pops up in my dreams at least one a week. I don’t know if this is because I’m a sensitive crybaby or some inherent weirdness about being the half sister.

Bleh. I’m just gonna keep trying not to think about it, which should be pretty easy this week because I have three work meetings. THREE! Like a goddamn adult who works. Plus, Wednesday night is a livestream Gina Frangello meeting and I cannot wait for that.

Rise up with fists, Darling Ones!
Jodi

(That made no sense at all, but the song just popped into my head. You’re welcome).

P.S. I have been dealing with a running toilet & then a leaky toilet since Friday. My nephew, Maxwell, fixed one issue last night and then the other problem popped up this morning. He drove back over and fixed that too. Plus, he noticed I dyed my hair blue, which my own mother who gave birth to me did not notice. He is the best nephew.

P.P.S. I got to pull out a bunch of Actual Factual Toilet Repair jokes, which still made Jaycie give me the stink eye.