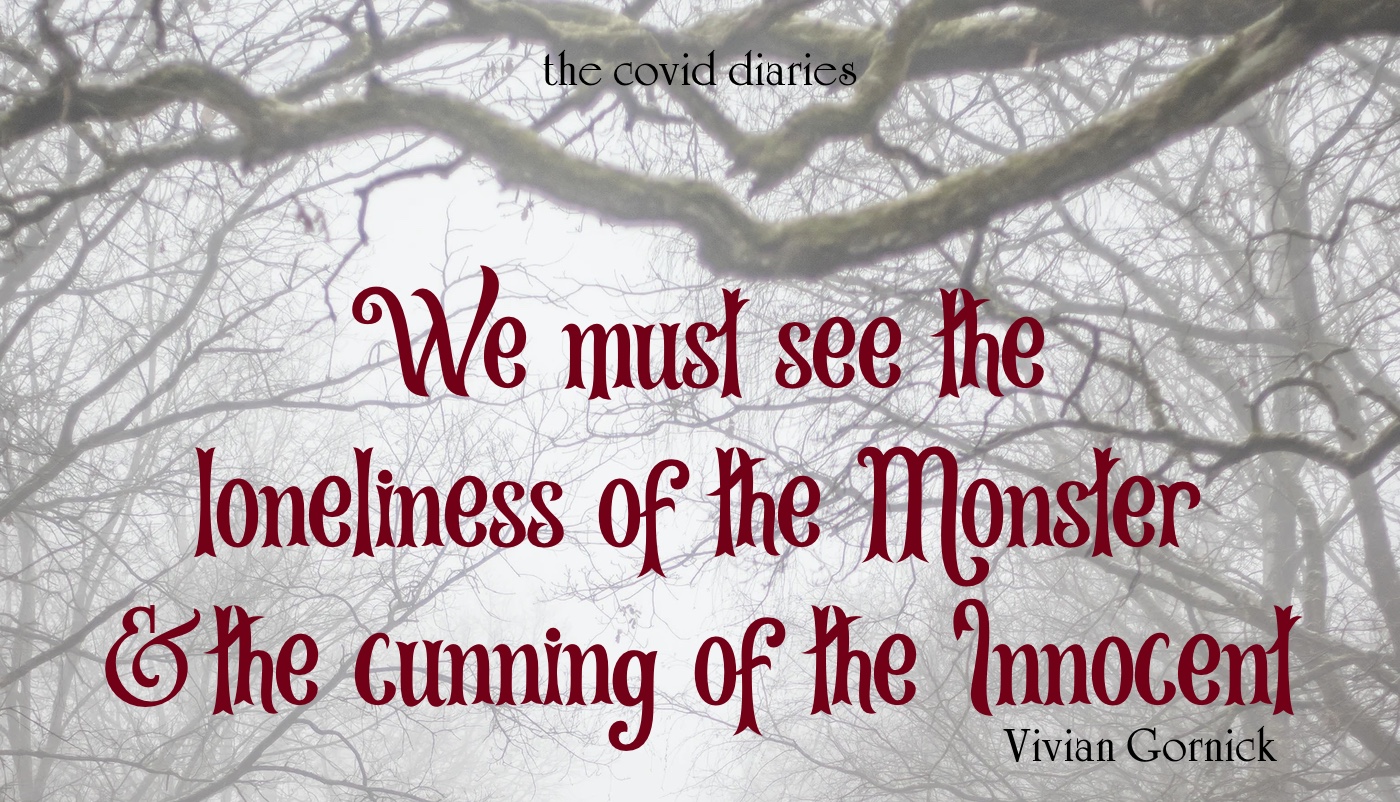 For many years I would email or message my pal Vodo (aka Beautiful Robert, aka Sweet Rob, aka my former writing teacher, for you longtime readers who cannot keep up with nicknames) every six or so months and ask, literally, “who said that thing about the monsters and loneliness?”

He would reply, “It’s Vivian Gornick,’for the drama to deepen, we must see the loneliness of the monster and the cunning of the innocent.'”

I’d reply, “Oh yeah, thanks.” Then promptly forget it about seven minutes after hitting send and then I’d email him again six months later. Surprisingly, he never made fun of me for this because he’s literally made fun of me for everything else ever. I guess that’s what makes him a good teacher. I’ve also emailed him about 39 times asking, “what’s the story where the couple goes to the cabin and stands in the snow without shoes on?” And he’d promptly reply with the title of the story and the author, and unlike the Vivian Gornick quote I still can’t remember that information. I bet it’s by Charles D’Ambrosio.

The Vivian Gornick (which I eventually wrote down so I could quit bugging Vodo) has been rattling around in me and not because it’s solid writing advice.

I’m feeling pretty monstrous, Darling Ones. Today marks three weeks since I’ve been in the actual, factual, physical presence of another human being. The Youths came over for gyros on January 13th and that’s it. Admitting this makes my stomach hurt. I tried to talk about it with my friend EM this weekend on the phone, but my throat got all clogged up with tears. Even though I cry all the time every day, I don’t like to sad cry in front of most people. Instead of finishing my thought, I made a joke and changed the subject.

What kind of monster conducts her life in such a way that she can go three weeks without being with another person and not only that, but shrugs off the whole thing like it’s no big deal?

I am broken in some fundamental way. I’m 99.9% sure being okay with this level of isolation is not normal. I’m lonely as fuck, but I don’t spend all my days curled into a ball sobbing about it. For the most part, I keep on keeping on and it feels wrong.

I try to tell myself this is all situational and if we weren’t in the middle of a pancake this wouldn’t be the case. But the louder part of me keeps saying I’m an ice robot and will die alone and nobody will even care or notice because I’m a fucking monster.

At least my writing is doing a good job of showing you the loneliness of the monster. Do you feel the drama deepening, Darling Ones? DO YOU?

In happier news, tomorrow Liz Phair is gonna be in conversation with Ani DiFranco and I cannot wait.

The monster at the end of this post,
Jodi

P.S I saw this on the twitters and it delights me to no end because The ‘Mats + LEGO gives me a nerd boner.