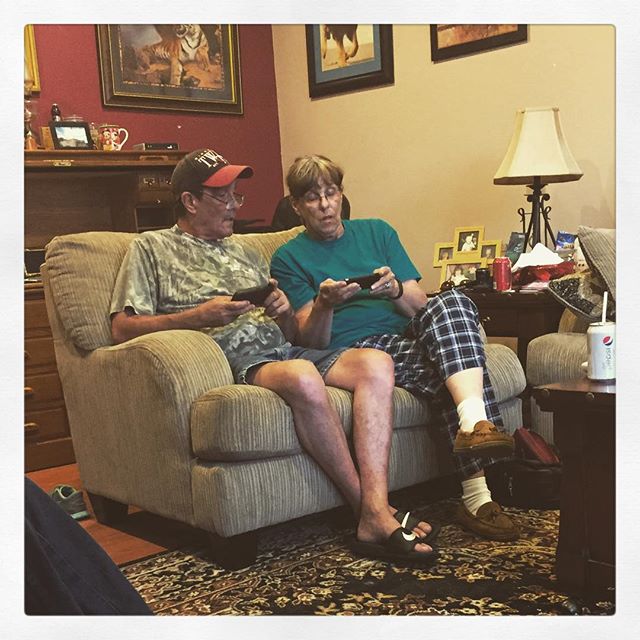 Because I worked at a software company for about 300 years and I’m a nerd, I’m the reigning Queen of Tech Support for most of my family. My sisters are pretty good at figuring their shit out. However, I did spend one night this summer trying to figure out why Sister #4’s year-old MacBook Air had only 24MB for space left (the culprit was many, many versions of her iTunes library tucked away in obscure folders she had transferred from computer to computer).

My parents and my Uncle Danny not so good at figuring their shit out. Did you know my mom’s twin brother, Uncle Danny, lives with my parents now? He does. It is hilarious and wonderful. The Tibbles often follow him around like little ducklings. They think Uncle Danny is the cat’s pajamas, especially now that he has a tiny six-toed kitten named Mittens.

Anyway, a good chunk of many a Family Dinner is spent updating various computer and investigating weirdness on their various devices. This is usually not such a pain since my parents use Apple products. My dad was the last hold out. I converted him last year during a grueling attempt to recover some shit from a Dell he bought sometime in the early aughts back when we still had the bowling alley. Remember the bowling alley? Yeah, it was that long ago.

Also, during the trauma that was the Dell recovery mission my dad kept referring to his browser as “Mozzarella Firefox” and I didn’t die from laughter or from him killing me for making fun of him.

It was the hardest thing I ever had to do in my life.

Or it’s that your dad needs to know how to send someone an email and does that mean he needs to download the Google Chromes?

Or, in a rare nighttime call, it’s because suddenly Mom’s Facebook is making weird noises and it never made noises before and after spending 20 minutes trying to teach her how to quit Facetime we learned it’s that the Facebook game always makes noises and it’s just that she always had it muted.

Or it’s that your mom was trying to do payroll and now it says she need to quit iTunes to finish installing something and does she even have iTunes? And there is nothing she can even click and she doesn’t have iTunes running and she can’t get out of the box so now what?

That was the case today.

While the solution to this problem is easy enough. . . restart. It takes about fifteen minutes to get to it. Why? Because my dad is operating the laptop while my mom is on the phone and even though I can hear both of them loud and clear they have to shout and repeat everything. Also, they have to argue about moving things on the screen. And the whole time the Price is Right is playing loudly in the background and my mom is all “Hon, hon she said to restart” and my Dad is all “Okay under the apple it says About this Mac, System Preferences, Location, App Store, Recent Items. . .” and he continues reading every item in the drop down menu out loud while in my head I am screaming “READ IT TO YOURSELF!” and then when he finally finds restart and clicks it, he has to read the dialog box that pops up to me and then he has to read the next one and then he has to narrate what’s going on.. . “Okay, the screen went black. Now it’s great and we have the apple and grey bar, and now it’s back up and there’s her Google Chromes. . .”

And that, darling ones, is how I will die from annoyance and impatience while my dad narrates the rebooting of my mom’s computer.