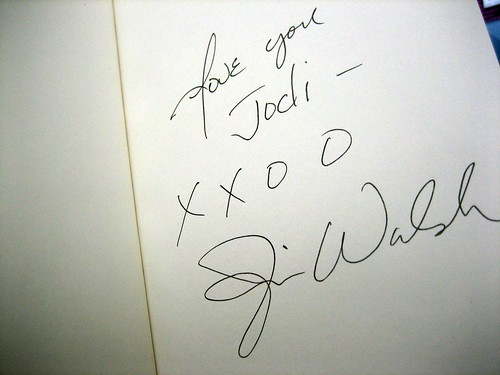 So there I was sitting on a folding chair on the lower level of the Barnes & Noble at the Galleria. I was supposed to be reading through the stories for class the next day but I was mostly eavesdropping on Jim Walsh’s mom introducing him to all his old neighbors who had shown up to hear him read and trying not to vomit over the fact that I was soon going to have to meet the man I had idolized since I was 20.

I must have taken a break from the eavesdropping and the not vomitting to daydream absentmindedly, because that’s when I saw Goetz. There he was right in front of me, grabbing a book from the display and thumbing through it.

Before my brain could even comprehend the implications, my mouth was calling out his name. He turned to look at me and I watched as the recognition slowly washed over his face.
“Chromes,” he said. “Oh my god!”

Goetz was a very good friend of mine from college. Someone I hadn’t seen in probably a decade. He was my editorial editor when I was editor-in-chief at the old Spectator. Seeing him there made the night take on a special sparkle I hadn’t anticipated. He asked me about the book and the ‘Mats and what not.

He or his friend went on to say something I can’t remember.

He sat down next to me to read the passage. “Kelly?”
“McKnight,” I said.
“Damn,” he said. “That was a good jukebox. I remember that disc [All Shook Down] being on there.”

Goetz pulled up the folding chair next to me and started to fill me in on the lives of most every guy I ever had a crush on in college and their friends. They are all married and have children. One has gone into politics, another has become a detective. It’s hard for me to imagine the hard-drinking, fun-having boys I knew as grown-up men with kids and real jobs.

“So what are you doing Chromes?” he asked.
I blushed and thought about not telling him the truth. “I work in marketing.”
His mouth fell open. “You’re an ad nazi?” he asked, using the term I had given to the Spectator’s advertising department.
“I know,” I whined. “I know. I am the biggest hypocrite. I’m the whore!”

At this point Jim Walsh took the podium and we had to be quiet. My story will pick up here tomorrow.