I arrived home this afternoon from my babysitting job to find a big, heavy box propped up against the front door of Supergenuis HQ. Since I’m a book blogger I’m used to having unordered packages regularly arriving on my doorstep. 99.9% of them time these packages are filled with books. For instance, today I got Sweetness #9 by Stephan Eirik Clark (who teaches at Augsburg). I plan on getting it into the rotation as soon as I finish one of the four books I’m currently in the midst of.

So anyway, the box. Did I mention it was heavy, because it was way heavier than any book I ever read, and I even read Infinite Jest. The weight of the thing excited me. Oh, I thought, a present! Since I spent all my current & future money on His Royal Frostiness the Archduke of Arctic Air, Fenwick Silverback the First, I knew it wasn’t something I had ordered for myself.

As soon as I sat down, I tore open the box, tossing bubble wrap around and was greeted by a hard, white plastic thing. My first thought was, “Someone sent me an old-school Macbook.” I was not displeased with this idea. I like Macs. Then I pulled the white plastic box from the white cardboard box and it was much too deep to be a Mac.

I popped open the lid found ensconced in the box, some sort of electronic device. Etched into the lid of the box was the HBO logo with #theleftovers underneath. It took me roughly 45 seconds to plugin the thing and I was promptly greeted by a black & white video of two women smoking. After a bit one of them held up a sign that said, “stop wasting your breath, Jodi.”

With Jodi spelled correctly (this doesn’t happen as often as it should).

Super creepy right? I waited a minute for the thing to Carol Anne me into the screen ala Poltergeist. Then I waited for the Log Lady or the One-Armed Man to appear.

Sadly, I don’t have HBO, but if someone wants to give me free HBO I’ll totally take it and write many posts about The Leftovers and only mention in every other one that I think Tom Perotta writes Dick Lit which is Chick Lit written by someone with a penis and thus gets all kinds of accolades because people with penises know way more things about suburban ennui and family life than those with vaginas. Yet, I’d still watch this show because Justin Theroux is an attractive man.

In an unrelated incident I dyed my hair blue. I’ve been meaning to get around to doing this since June of 2012 when I bought the Manic Panic after a mean stylist decided “oranges and purples” meant blonde. It’s the curse of the suburban hair salon where they think everyone wants to be some shade of blonde. I don’t. If I had a nickel for every time I had vehemently hissed “NOT BLONDE” while in the salon we could all go get fancy dye jobs and hair cuts on me.

So it doesn’t look that blue in the shitty picture I took of myself, but it’s blue enough that when I put my head down and look through my hair I feel like a superhero and that’s all that matters really. 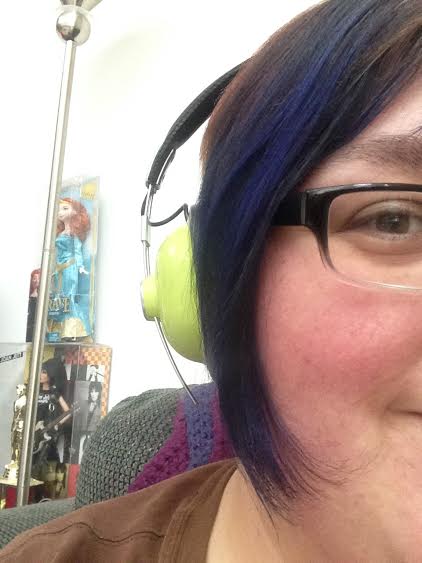