One of the dangers of being a single person who lives alone and has been kind of busy is that your refrigerator can go on the blink and you might not even notice it until all the stuff in the freezer has gone from frozen to room temperature.

That’s what happened to me yesterday. It was a discovery I made, much to my dismay, upon arriving home with $100 worth of fresh groceries. I have to admit, I’m pretty proud that during the entire too gross for words clean out of the busted fridge I only cried a few self piteous tears. Those were tears about all the food I had wasted. So much food. Pounds and pounds of ground turkey and chicken breast. And the ice cream! And all the spaghetti sauce I’d made last summer from CSA tomatoes! And so many chipotles in adobe! And a few frozen pizzas to boot.

And in the fridge portion? Well, I had to kiss my carefully cultivated mustard collection goodbye. A nearly full bottle of Siracha is no more. So were all the salad dressings. And string cheese for miles.

It was tough. Growing up in poverty has left me with huge issues regarding food waste. I’m an obsessive leftover eater. I will force leftovers and other food on people if I know I can’t eat it. This is why I rarely have pizza delivered, because I can’t often make the three-day leftover commitment.

So I thought a few tears were justified. Plus, did I mention the awful stink? It was super stinky.

But the worst part about a fridge on the fritz is that there is no ice for the totally earned and necessary gin & tonic. Instead you will have to console yourself with suburban nachos and whatever else wasn’t too gross smelling to eat. (Suburban nachos recipe: sprinkle pre-shredded cheddar cheese on nacho cheese Doritos. Nuke until the cheese is slimy, and the chips ooze with grease. Serve with salsa).

After much family consultation and the decree from Ben that based on the problem I was looking at hefty repair bill, it was decided that I would embrace consumer debt and buy a new refrigerator.

“Get something super nice,” Sister #2, The Enabler, said. “You’re going to have to live with it forever.”

And so I did. Of course, when you’re upgrading from the generic Kenmore BS they put in this pop-up townhouses anything is fancy.

Introducing His Royal Frostiness the Archduke of Arctic Air, Fenwick Silverback the First. 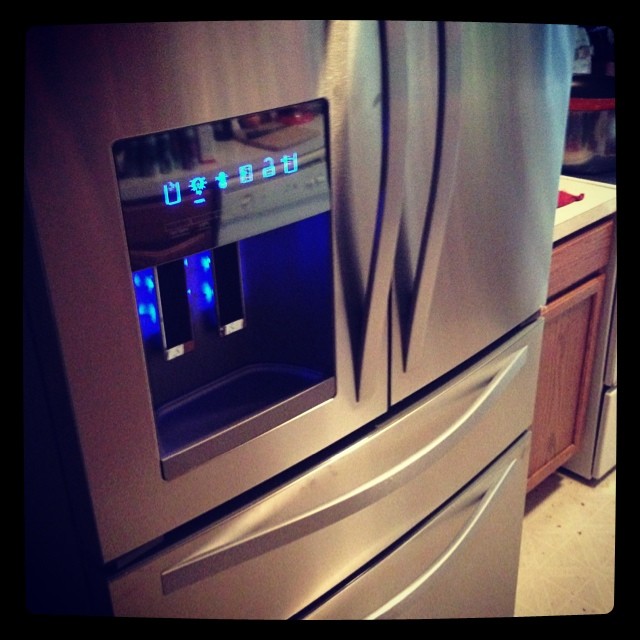 Aside from Supergenius HQ & Ruby, this is most expensive thing I’ve ever purchased. And it is, by far, the fanciest thing I own or probably have ever owned in the history of my life. It’s more high-tech than fifteen-year-old Ruby (who doesn’t have power windows or locks) and way shinier than Enid (my four-year-old Macbook). Fenwick is probably too fancy for this hovel of squalor I lovingly call home, but damn is he pretty. So much shiny prettiness and chill air.

Not only is Fenwick the utmost in kitchen elegance, he’s also super thoughtful. I was perusing the user’s manual to discover he has a “Sabbath Mode” for people who need to turn off dispensers and lights for religious observances. Can you believe that?

And the if you open one of the doors or the drawer just a little, the light inside only comes on a little. it gets brights the wider you open that stuff. So smart!

Also there is a red the door is ajar light, and probably a million billion other functions that I don’t know about because I stopped reading the manual after the Sabbath Mode discovery.

Also, because you are probably curious and this probably the last time Fenwick will be this clean. Here’s what he’s got inside so far. 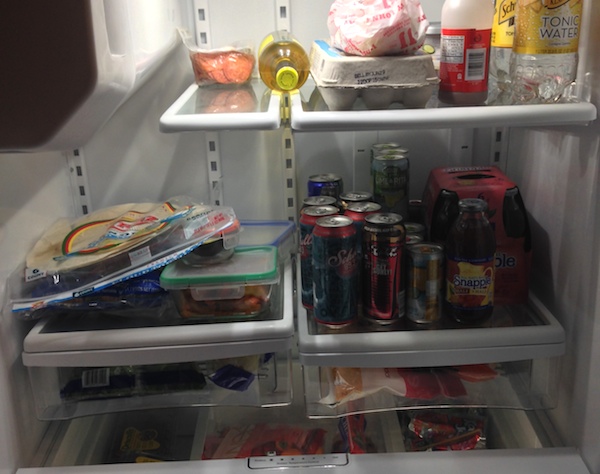 Today’s #DailyWendell song is “Basement Tapes” by Semisonic because he too is cool temporarily because he’s from Minnesota. pic.twitter.com/M5GJ…

@Wolfdog I only wish it were a full record & not a little EP.

@fivehundy Yes! I’m a little watery-eyed here for the same reason. It’s a soft sweater and a hot beverage on a cold day kind of comforting. Dan Wilson, man.