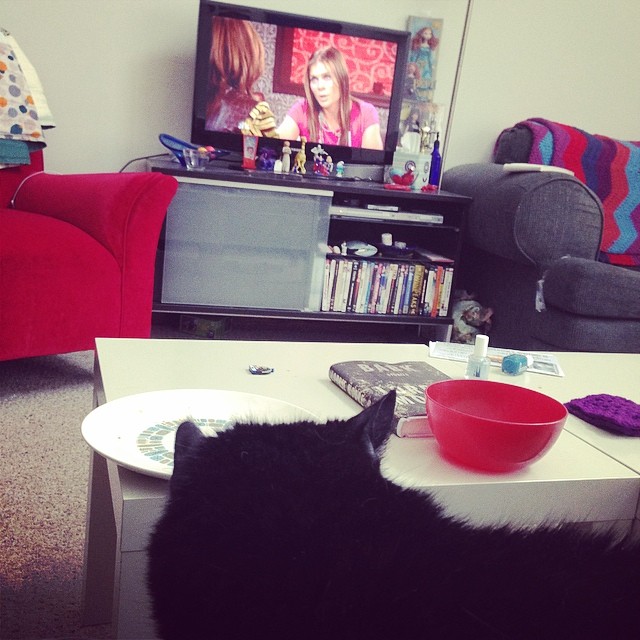 My Sundays have taken on a routineness that have made them take boring to whole new levels. Make no mistake, Sunday is easily one of my favorite days of the week. However, not even my superhero-like abilities to make the mundane sound magnificent can take on the boring sameness of my Sundays: write, read, nap, eat.

So for a delicious change of pace, I will write about my boring Monday. At Supergenius HQ we believe in shaking up the boring on occassion.

Today started out a little later than usual, because I could not drag myself from sleep. I was in the midst of a crazy cock-blocking dream. Is it still called a cock-block when it is a woman who is being blocked from the cock? I am not sure and the sexism inherent in so much of our sex talk drives me fucking nutty. All I know is I was trying to get it on with David, a young man I knew in college and haven’t seen since the 90s. My game was being blocked by everyone I ever met, it seemed — Whitley, another college friend, along with her husband and two young sons; Steve, from writing group; Sister #4; and Patton Oswalt.

Fuckers. All of them.

So I woke up on the cranky side of bed, dressed, and stumbled down for coffee.

I spent the morning writing reviews for Minnesota Reads and procrastinating. See, I only have one work-related thing that really, truly needed to be done and why accomplish right this very second something you can totally do in a panic later in the day? That’s my motto.

By the time I was done farting about with MN Reads it was like 11:30ish and practically lunch so no sense in getting to work now. Instead, I spent a good portion of pre-lunch time Facebooking memes with Steve & Kurtis in our super secret Black Sheep Facebook area. I busted out the McKayla is not impressed/Dawson Cry Face and then lost at least 15 minutes to fits of giggles.

Lunch was hard salami & spinach on a croissant with Cheetos, scarfed down while watching “Days of Our Lives.” Go ahead, judge. I dare you.

Okay, I lied. I did the Facebook stuff after lunch. I have no recollection of what I did from 11 a.m. to 12 p.m. Probably drooled at the Internet is my guess.

So after doing the Facebook thing it was really truly time to get that one assignment done. . . as soon as I picked out the proper music to toil to. Tegan & Sara won the work-to lottery because I was feeling sort of early-aughts. Then I worked my ass off for the next two hours. It involved writing and thinking and second-guessing and more writing and thinking. Then I emailed that bitch off an hour before the deadline because I rickety rock the casbah. After that I decided to brown up some sausage with garlic, peppers, onions, and spinach in advance of dinner making.

Then I had to do some boring web maintenance for a client. Sometimes the boring projects are my favorite because I can turn up the music (Lydia Loveless, because I am obsessed) and turn down my brain.

Aside: It’s 9 p.m.ish as I type and I just found a Cheeto in my bra. I don’t know how it got down there.

After work I concocted a lasagna out of various ingredients from my kitchen. This makes me feel super grown up and responsible. I hadn’t planned to make a lasagna this week, so I didn’t specifically shop for the fixins. And the lasagna was delicious. Probably the best I’ve made in awhile. I’ll give all credit to tons of garlic and the tomato sauce I made this summer from CSA tomatoes and onions (and was smart enough to freeze). Go, Jodi!

As the lasagna cooked I settled in for an ep of “The West Wing.” I really need a support group for this show. I need everyone I know to hurry up and watch it and catch up with me so I can go on and on about how Toby is my much-older, balding Jewish boyfriend and how I wouldn’t mind exploring the boundaries of my sexuality with CJ Cregg.

Then was the dinner and dishes and now another episode of “The West Wing.” It’s a good’un but it doesn’t have Toby so I’m a little sad.

[icon icons=”icon-calendar” align=”left” size=”icon-5x” color=”#005e80″]
The “It’s (Insert Day of Week) and I’m Boring” is a series that Christa and I do to pay homage to the beauty of old-school blogging. (I totally copied this nice explanation from Christa).