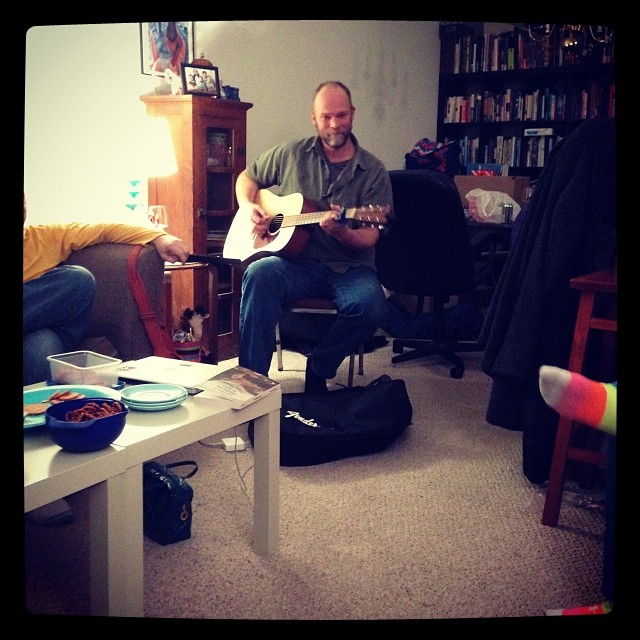 We had Rock & Roll Bookclub at Supergenius H.Q. last night. Even though I’m an Angry Hermit, I do so love having my house filled with people for a night. It’s when people don’t ever leave that I start to get a little itchy inside my skin.

We were down a member due to illness, and nobody finished the book (the interminable and dreadfully boring Wuthering Heights), but it was wonderful. We gorged ourselves on soup and blondies, wine and cheese, and talked about how boring and complicated and boring the book was. We caught up from Christmas, and the teenagers’ various boyfriends/girlfriends. We talked about credit card fraud, coupons, sex, Division 1 schools, and volleyball.

And then for awhile we didn’t talk, we sang. My favorite part of Rock & Roll Bookclub is when Wolfdogg busts out the guitar and plays. We throw requests at him and he plays what he knows or can guess at.

He started with Jason Isbell’s “Traveling Alone,” which made the rest of bookclub roar with laughter as I pronounced “I love this song. It’s Jason Isbell.” A few minutes earlier I had quipped that I thought Jason Isbell wanted me to love him because he often tweets about reading books I like. It became a running joke throughout the night.

He played “Swinging Party” by the ‘Mats. When he was through both Delilah and Jaycie confessed they only knew the song because Lorde covered it.

Then he started a new one that made Jaycie cock her ear to the side because she recognized it. “I don’t know the words to this one yet,” he said. “Jodi probably does.”

Then he played Jeremy Messersmith’s “It’s Only Dancing”, and I died of happiness eight times. Not only because I love the song, but because Messersmith is one of the few musical things Wolfdogg & I don’t agree on. I’m all heart, heart, heart and Wolfdogg’s all meh.

But then, I guess, after I went all #1 Crush on “It’s Only Dancing” Wolfdogg did some youtubing and discovered a video, which made him realize what a great song it is. As soon as I settled in the La-Z-Grrl, I went in search of the video & have been watching it over & over.

I had just finished up lunch (leftover pasta e fagioli soup) and decided to check into Twitter before diving back into Jenny Offill’s so-far-so-swoon-worthy Dept. of Speculation when I my eyes tripped over Michael Schaub’s tweet, “Oh, God. Philip Seymour Hoffman, RIP.”

Tears filled my eyes as searched for the news and my Twitter feed quickly filled up with much dismay and sadness and disbelief. As I said to my friend Liberty, I’m usually an ‘Oh, that’s so sad’ type of celebrity mourner, but this one kicked me where it counts.

I’m not a movie person and will never make the claim of being a cinephile. However, the few movies I do love I love with my whole heart. And at the very top of my all-time favorite list sits “Almost Famous.” It is one of two movies I know line for line. I can do entire scenes from memory. But my favorite bits are Philip Seymour Hoffman as Lester Bangs. AMEN! Particularly, this one.

I lost most of the afternoon in a fog, watching the public mourning of Philip Seymour Hoffman. I was curious to see how long it would take for the crass jokes about drug addicts to start flying. When Whitney Houston and Amy Winehouse died, the jokes were instantaneous, cruel, and in poor taste. I didn’t see any jokes about PSH, only some sanctimonious lecturing. I’m curious if this is a male/female thing or a public/private battle with addiction thing. Someone should do a study and figure that out for me.

Super Bowl was spent at Family Dinner where we ate apps and talked in front of the football game with occasional pauses to pay attention to a commercial (Radio Shack was a big hit, so was that Clydesdale/puppy one). But mostly we jabbered through the show. I get talkier when I haven’t spent a lot of time around other humans, and because I skipped Family Dinner last week due to inclement weather I was two weeks behind on all the gossip and goings-on.

I had intentions of coming home early to get the aforementioned work done, but that didn’t happen due to brain fry. Two social days in a row is a lot for me. I need to not talk for awhile now.