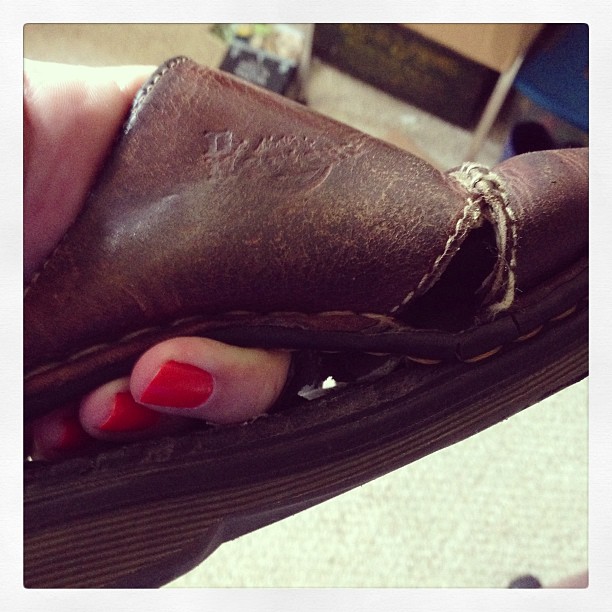 It is a sad day at Supergenius HQ. It’s a day I’ve known was coming for a few weeks now, but chose denial over reality. However, last night when I went to Sister #2’s for Family Dinner, I nearly nose-dived through her screendoor because my right shoe fell off when I didn’t expect it. Even with that, I thought maybe I was just clumsy (I am often clumsy).

But after nearly biting it after coming home from the library, I could not deny the facts any more. The shoes were out to get me!

Or, really, as you can see from the picture, my most beloved pair of Doc Marten slide-on shoes have given up the ghost. This is more devastating than that time my favorite orange bra died.

I loved these shoes. I wore these shoes pretty constantly for the past 10 years. Neither snow nor rain nor heat nor gloom of night stayed those slip-on bad boys from their appointed rounds. And now. Now they are gone. If you’ve ever met me in person there’s a 99.5% chance I was wearing those shoes.

I still remember when I bought them on August 7, 2003 (thanks Zappos order history!) for $50.90. It seemed a little extravagant at the time. Not because the shoes were $50, but because I bought three pairs of shoes at once for a grand total of $152.70! Then again that was the early aughts when I was rolling around in copywriter money and $600 a month rent. Oh, the good old days.

I still have the other two pairs, and one of them might become my new go-to pair of shoes. The other pair I don’t wear too often because the soles are super thick and they make me like an inch or so taller and wearing them feels like I’m walking around on skyscrapers and I will plummet to my death at any moment.

That’s why I loved these now-dead babies so much. They were super flat. And comfy. And just gender-neutral enough that I could pretend that I was sliding my size 12-clod hoppers into some real girlie shoes. And also, they were $50 shoes that lasted nearly ten years, which for a shoe-loathing person like me is the best thing ever.

As my mom often reminded me, I’m hard on shoes. This is why I don’t think I’ve ever had a pair of shoes last ten years. Not shoes that I wear all the time every day. I have tons of shoes that are 10 years old moldering in my closet, but they are the shoes that never made it into the permanent rotation. They are the squeezy, squeaky, and generally uncomfortable (along with the ugly, the don’t match anything, and then oh, I forgot I bought these).

Now, I have to go forth into that closet of unloved shoes and find something suitable, which sucks like butt (this is The Tibbles’ favorite saying for everything they don’t like, something they say so often it has creeped into my vocabulary).