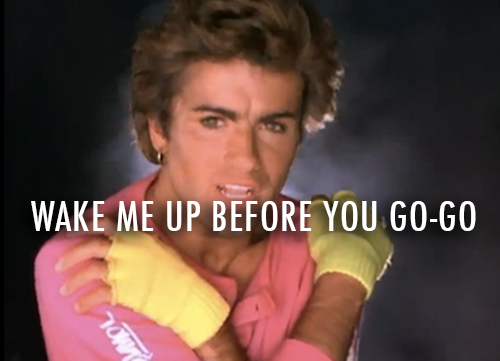 Late last week I tripped into a musical hole called 1986 (which actually included music from about 1984-1986, and would probably be more accurately called a Junior High Musical Hole) and I’ve had a really hard time getting out of it. And lest you think otherwise, I will tell you right now my version of 1986 didn’t include anything by The Smiths or R.E.M. or The Replacements. While I know, now, that they all existed in 1986 they didn’t matter a single fig to me. The only band that mattered, really, was Glass Tiger, and occasionally Mr. Mister.

Originally I was going to talk about how “How Will I Know?” is Whitney Houston’s best song and if you don’t agree you have the taste-level of a not very smart Smurf like Jokey or maybe Hefty, but then I found a better story about being able to reclaim “Wake Me Up Before You Go Go.”

(what is up with that Choose Life shirt George is wearing in the video? It feels like anti-choice propaganda looking at it now in twenty-thirteen)

I hadn’t realized it last week when I was getting lost in all the jitterbugging and the putting of the ‘boom boom into my heart’ that I could finally listen to that song without suffering from any sort of sadness. In fact, I didn’t realize I had been listening to the song for the better part of three days without ever thinking of that asshole Mike LaRoche until I sat down to write about Whitney Houston and 1986.

Damn! It’s been like twenty-six years since the song was ruined. That’s a long damn time, and it shows how deep the scars of the bullied go.

I loved the song from the get-go (go) back in the early 80s. I loved it so much that I had a shirt that said GO GO on it kind of like they did in the video. Only mine was some sort of shitty Target (back in the mid-80s Target was shitty) or Kmart knockoff and, I believe, featured Snoopy lying on top of the words GO GO. Which seems a little antithetical, now that I think about it.

It doesn’t really matter, because I only got to wear the shirt a few times before I had to dismiss it from my meager wardrobe (in case you forgot: tall, fat, poor girl = very limited clothing options). I had to take the shirt out of rotation because every time I’d wear it Mike LaRoche, a rat bastard a year older than I was, would follow me down the halls of Roosevelt Junior High chanting “Go Go Gorilla.”

Obviously the shirt had to go. Back in my day teachers didn’t do anything about bullies. Not even in High School when Mike LaRoche upped his bullying ante by referring to me as ‘Harley Mama’ for reasons I never understood but had something to do with my butt, because whenever he called me Harley Mama, which happened every day he was in school after history class, he’d grab my ass.

In my memory I punched or elbowed that moutherfucker sometime sophomore or junior year. However, I’m not sure if that’s just wishful thinking or not. I was a pretty meek 6’3″ sixteen year old. When you’re the biggest kid in class you learn early on that any injury that might come from some sort of childhood violence will be blamed on you. Apparently, we big brutes can’t control or violent tempers? I don’t know. I blame it on fairytales poisoning the minds of people against giants for for hundreds and hundreds of years.

Speaking of giants and the dumping of the GO GO shirt, I had to stop wearing green in elementary school after those fuckers started calling me the Jolly Green Giant whenever I would wear it. I still don’t wear green very often.