First of all, for those of you who want to know such things I listed my 10 favorite books of 2012 over at MN Reads.

Second of all, I started most of these habits back over Thanksgiving weekend when I got the new couch. Did I tell you about the new couch? It is brown and very couchlike. I got a new couch because I was tired of the short blue couch. I told you this, didn’t I? I’m too lazy to go look so just act like this is brand new information.

So when I got the new brown couch I had to clean the crap out of my house. It was genius planning on my part because the new brown couch was delivered on the Friday after Thanksgiving which was the day before I was to host Rock & Roll Bookclub. It was like getting a two-for-one on my cleaning efforts. 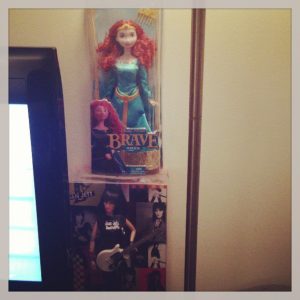 Or it was the truth because I’ve been like super clean since that Friday after Thanksgiving. Super clean here is relative. I’m not gonna win any kind of homemaker awards from Betty Crocker or Mr. Clean or anything like that. But if you were to come over right this second as I type. Well, I’d be a little freaked out because dude, you don’t drop over unannounced, but I wouldn’t have to die of embarrassment at the squalid conditions of my living quarters. Oh, and also this only applies to the downstairs ‘public’ areas. If you went upstairs I’d have to kill, or you’d just die of your own free will because it’s dusty as shit up there and it’s like an abandoned bra/sweater jungle. Those suckers are hanging all over the place up there. Which is still, you know, an improvement because the downstairs used to the bra/sweater jungle. Now I’ve learned to put my shit away. Though there is a hoodie and a scarf hanging off the bannister down here, because I am human after all.

The other thing I’ve begun to do. . . the dishes! I know, I know you’re like “Welcome to grownuphood, Chucklehead, enjoy the stay.” But as I’ve mentioned 827,041 times I’m single & I live alone which means that nobody ever knows how awful I am. Ever. I’ve, essentially, lived in a state of college-like squalor for the last twenty years. It was time for something new, and since I’ve done the unrepentant slob thing I thought I’d try the endearingly messy grownup thing. Look at this old dog learning new tricks.

Also, I got a sexy persimmon-colored Kitchen-Aid Mixer for Christmas which I plan to take out of the box any day now and that totally deserves a clean kitchen. Right?