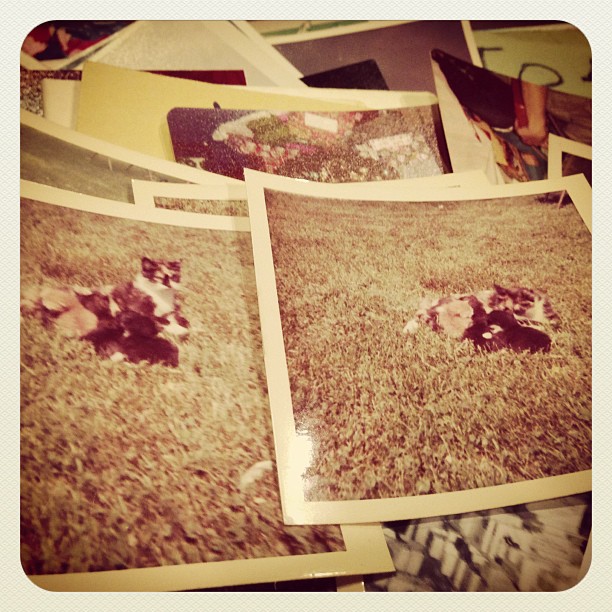 I rang in the New Year at Sister #2’s house as I do most every year. Occasionally I get all crabby and spend the evening alone, but that only happens once every five or so years. I’ve had roughly three really memorable New Year’s Eves in my life one of which is not meant to be described on this site that is often mislabeled ‘Pornography’ by censoring software because then it wouldn’t be mislabeled anymore. And the others are mostly forgotten in the rum or gin-fueled mists of time.

Anyways (I did that on purpose because of Christa), I spent the Eve looking at a bunch of pictures my mom had dug out for my niece. Jaycie is doing some sort of family history project for school that involves interviews and, obviously, pictures.

So while I was going through the photographic history of my family, I happened upon a series of photos, two of which you can see above. There were about eight photos in this series. And what is this a photo essay of? Cute cats. For real. Sometime back in the late 60s or early 70s, my mom took a bunch of pictures of kittens playing in the yard. There was also a few photos of my Uncle Wayne playing with the kittens.

“Look,” I shouted as I waved the pictures at my sister and brother-in-law, “it’s in our DNA!”
“What is?” one of them asked.
“Cat pictures!” I squealed as I took a picture of the vintage cat pictures. “We can’t even control it.”

Vintage housewares are my weakness. #SpinsterUpdates

Incidentally, this is exactly how I got my entire set of Temporama dishes for $100.

Sometimes I make ridiculous best offers on eBay, and so now I’m going to be the owner of a beautiful yellow vintage Dansk Kobenstyle pan for the low, low price of $42.95 (that includes shipping!)