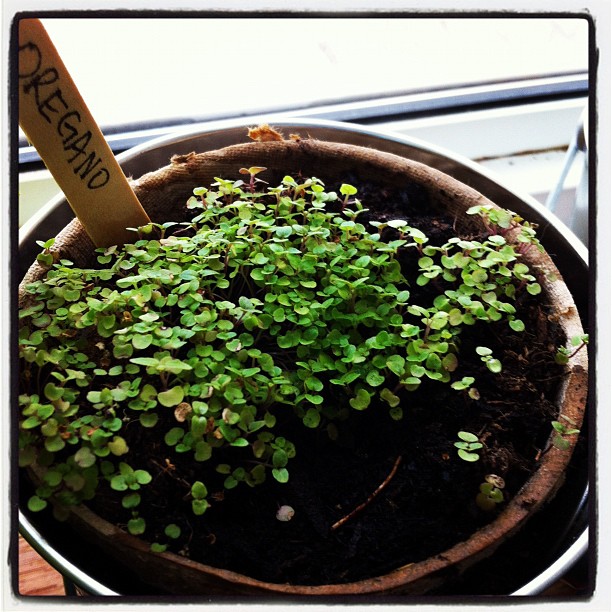 I’ve been FORTY! for exactly thirteen days and now I have a lizard eye. Specifically, I have a lizard-y eyelid. It seems a portion of my left (and only my left) eyelid has decided to become painfully dry and flaky. It is annoying and the urge to constantly pick at it is great. However, picking at it hurts and the urge to not be in pain is even greater.

What does this mean? It means that FORTY! is the magical age where you Google shit like “flaky eyelid,” “do you put eye cream on your eyelids?,” and “is eyelid one word or two?”

Since I was already in the Google Danger Zone (really, I’m surprised I did not discover I have a rare form of eyelid cancer and have about 8 minutes to live), I set out to see what was going on with the herblings.

I spend a lot of time worrying about the Oregano. As you can see above, it is not thriving. It’s not dying either. It’s sort of just maintaining. This is not acceptable. Oregano’s siblings Cilantro, Mustard, and Sage are kicking ass at thriving. I still don’t know what is wrong with the Oregano.

However, I have discovered what is wrong with the Chives, Garlic Chives, and Sweet Marjoram. It seems we have a case of Fungus Gnats. Isn’t that just about the nastiest thing ever? Fungus Gnats. Because fungus and gnats weren’t disgusting enough on their own.

The second I discovered I had The Fungus Gnats all my hippie, organic, pesticide-free ideals went right out the window and I set about figuring out what kind of Napalm/Agent Orange/Toxin concoction I needed to eradicate these teeny-winged pests. Apparently you can use something called Neem Concentrate, which sounds kind of scary. You can also use something called Mosquito Dunks, which sound kind of awesome.

Some super-hippie on a message board suggested sprinkling the invaded plants with cinnamon which will kill the fungus and thus with their food source destroyed, also the Fungus Gnats. Since I had cinnamon in the house I went with that option. This had the benefit of helping erase the final, clinging odors of the Great Father’s Day Fried Chicken Failure of Twenty-Twelve. So there’s that. I’m still totally getting me some Mosquito Dunks though, because that name is so awesome.