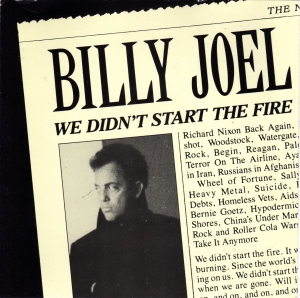 First, I think this 2005 thread about which is more annoying “It’s The End Of The World As We Know It” or “We Didn’t Start The Fire” is my favorite thing on the Internet today. That’s saying a lot, because I fell pretty hard for The BBC’s The Women of Watergate package.

I discovered the thread because I realized that even though I’d probably come down on the R.E.M. side of this debate, I know all the words to “We Didn’t Start the Fire.” I know about 1/4 of the words to the other song.

At first I thought, “hrmm, perhaps you can discern something insightful about a GenXer’s personality based on which song they were more familiar with.” But then I decided the Billy Joel song is easier to remember because it’s a chronological listing of events and R.E.M’s song is random set of lyrics that may or may not make sense based on your feelings about R.E.M.

With ‘Fire’ you can make a pretty educated guess based on the music and rhyme scheme and history what’s gonna come next. ‘End’ not so much.

Also, I think MTV played the shit out of the video when it came out in 1989 and I don’t recall MTV playing any R.E.M. video back then that wasn’t “Stand.”