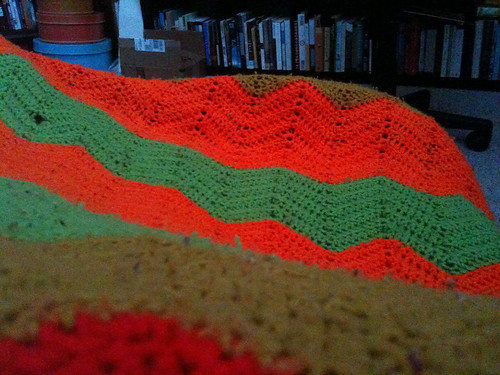 Max calls his Winkletoe and Jaycie’s is Sparkletoe. Cade called his Wushy. Liam calls his D.T., because that’s what Nolan called his. Mine’s called Blackhole Sun, a nickname given to it by my college roommate F.R. Chicken because of its resemblance to an afghan that can be seen in the Soundgarden video.

Blackhole Sun was knit by an anonymous person and discovered at a garage sale by my Aunt Anna when I was in college. I remember when she gave it to my mom she said, “It’s really ugly, but it’s so long I thought you’d like it.” It’s some 84ish inches long and I loved it immediately. My mom gave it to me since I was the only person who would truly appreciate its length. And I have, lo these many, many years.

I spent the weekend huddled under Blackhole Sun (I think the temperature was -14 yesterday) curled into the La-Z-Grrl alternately watching old episodes of Mad Men Season 1 and reading Craig Thompson’s graphic novel Blankets.

In fact, I just finished Blankets and have been sitting here in the blue haze of Minnesota’s January twilight clutching all 582-pages of it to my chest, pondering its beauty, its wonder, the tender coming of age story it tells, and thinking about blankets the actual things and the metaphor.

And it was all perfectly lovely and I wanted you to know that.