The urge to live-tweet the last five episodes of Dawson’s Creek Season 3 is strong, but my will is mighty. Seriously folks, these five episodes are probably the best run Dawson ever had. From the day after Pacey kisses Joey to when she sails off into the sunset with him leaving Dawson to make this face: 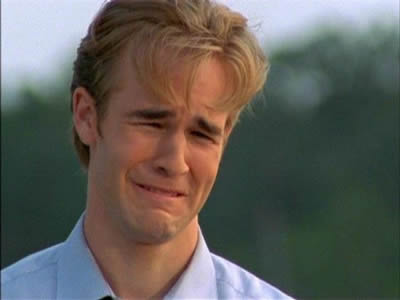 You also throw in Junior Prom and Aunt Gwen’s house when Pacey says “I can’t keep on kissing you, Joey.” Damn (that scene just happend right now as I was typing this post and it gave me THE SHIVERS). How can you not love the crap out of this show? Also, I’m developing some really harsh theories on what a complete and utter self-centered asshole Dawson the character is. Finally, I will never pass up an opportunity to post that picture.

I got some sort of stomach-y barf bug on Thursday afternoon. It sucked. Hard. At some point as I was shivering and sweating in bed and cursing myself for not turning off the TV before I collapsed I actually thought “my cat just died how can I have the flu?” Somehow I decided that being sick so soon after Madison’s death was extra cruel. Also in the sweaty pits of my fevered brain I thought maybe I should text someone that I was sick in case I died in the night, but the actual texting was too much work.

Yesterday as I was coming out of my barf bug delirium, I laid on the short blue couch (I hate my couch. It is lovely to behold and not too bad to sit on, but I’m 77 inches and it is not even close to 70 inches so it totally sucks for laying on unless I bend myself into pretzel like contortions, not that I’m above that at all, but still it’s not so much with the comfort) and watched America’s Next Top Model the British Invasion. First, it totally made me feel like Hazel from The Fault in Our Stars minus the life-threatening cancer and the dreamy boyfriend. Second, it made me shed actual tears of embarrassment for some of the model contestants. Tyra Banks is demented. Yeah, sometimes I will be so embarrassed for people on TV that it makes me cry. It’s probably why I don’t watch American Idol.