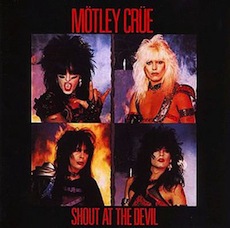 In 1984 the Shakopee Town Square was a pretty happening little mall, well for Shakopee, especially pre-horse racing and casino next door Shakopee. It was anchored on one end by Juba’s grocery store and K-Mart on the other. In between was an odd sort of BenFranklinesque/Woolworthy store called Duber’s, a Snyder’s Drugs, an ice cream shop, and Capones.

My Aunt Cathy, who is two years older than I am, and I spent a lot of time at the mall. We would walk the mile from my grandma’s house, past the cemetery, and the construction of the women’s prison, past the pool, and take the ‘short cut’ that involved walking through a field of corn.

We spent a of time at Snyder’s, where Cathy would buy makeup (the red eye pencil by Maybelline, the kind you’d burn with match to liquify) or Dippety Do. Occasionally we’d have to pick up some “Love that Pink” Revlon lipstick for Grammu. I didn’t buy much, I hoarded all my money for Capone’s.

Capones was the very place to be if you were between the ages of 12 and 15. It was a pizza place/arcade, made all the awesomer by the fact that the two placers were actually separated by a door. Sure there was a window lined with booths that looked into the arcade but as long as you weren’t being too annoying nobody ever bothered you.

This was the place and the summer where I learned to kick ass at Ms. Pac-Man. The very same summer where I spent a good third of my Pac-Man quarters on the jukebox where I played Slade’s “Run, Runaway;” Billy Joel’s “For the Longest Time;” and The Clash’s “Rock the Casbah” on repeat. I couldn’t even tell you what other songs were on that jukebox. Those were the only three that mattered.

I can tell you what was not on that jukebox: any song off of Motley Crue’s “Shout at the Devil.” You see, this was the summer Aunt Cathy discovered making out with mulleted blondes, Marlboro Reds, and heavy metal. I’m not entirely sure how she even knew about Motley Crue, but she was obsessed with getting the tape.

It became our summer’s super secret mission. Cathy was convinced her mom would never let her have such subversive music in the house. So she set about getting the money, and spent the week skimming from the money Grammu gave us every afternoon for our dinner, and begging for spare change from her brothers and sisters-in-law who stopped by to visit.

Finally, the day arrived. With the $7.99 (plus tax) in the pocket of her tight jeans, Cathy marched up to K-Mart eager to get her hands on that hot hot metal music. Her exuberance quickly turned to anger when she discovered K-Mart didn’t carry “Shout at the Devil.” She stomped out of K-Mart and threatened to go home. I did not want to go home, I had quarters and it had been an entire 24 hours since I’d last heard Billy Jowl.

We wheeled into Duber’s and made a break right for the music case. Duber’s kept their tapes locked in a plexiglass merry-go-round on the counter near the checkouts. If you wanted to buy one, you had to get someone to unlock the cabinet and get the tape for you.

Cathy leaned in close, her nose nearly pressing up against the fauxglass. She spun the case slowly, reading each tape. She came over to where I was browsing through costume jewelry and dragged me into fabrics at the back of the store.

She turned and walked out of the store. I stood up as tall as I could and went up to the counter.

“Can I have Motley Crue “Shout at the Devil?” I asked, pointing to where it was in the merry-go-round.

The cashier unlocked the cabinet, grabbed the tape, and rang me up without so much as a word. I walked out of the store triumphant, as though I had pulled some sort of heist.

Cathy was jubilant. So happy at getting the tape that she allowed me to play Ms. Pac-Man and listen to all three of my songs before dragging me home to listen to the tape over and over again. We spent the rest of the summer listening to it and convincing ourselves that the beautiful blonde one was most definitely Nikki Sixx and the guy with two stripes on his right cheek was Mick Mars. Like I said, she had no idea who they were.

I will just add, that two summers later I totally impressed the hell out of the Doors-loving metal head I had a crush on at summer camp by knowing every single song on that tape by heart.