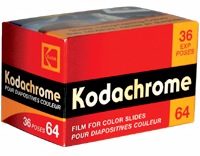 When your name is Jodi Chromey (and I believe their might be two of us, though the other one is Jodie Cromie or Jody Kromey or something like that, which, I am sure we can all agree, is vastly inferior to Jodi Chromey) you develop a love/hate relationship with Kodachrome at an early age, and you will feel really sad when Kodak decides to discontinue Kodachrome color film.

For most of your childhood you will be blissfully unaware of the song or the film. You’re completely ignorant of Paul Simon’s solo singing career and all you know about him is that he’s not Art Garfunkel. Even though you couldn’t name a song by Simon & Garfunkel until you were sixteen, you spent a lot of time studying their record jackets and based solely on the picture, you’re sure Art is the creative genius behind the duo. This is beginning of your career of backing the wrong horse and routing for the underdog all at the same time.

In 8th grade band you’re the first chair alto saxophone player, which means that you sit right in front of the trombones. Jason Kneizler plays the trombone. On that fateful day when Mr. Campbell hands out the sheet music for the new song you’re learning (apparently having grown tired of “New York, New York”), Jason will be the one to first realize that Jodi Chromey is a lot like Kodachrome, the song on the sheet music. For reasons that can only be explained by the fact that you’re thirteen and hate everything that isn’t Sweet Valley High, Dance Party, USA, or Cam Anderson, you decide to detest the name. In fact you take such a disliking to the name that you write about it all the time in your journal, though secretly deep down you kind of like it because for about a week in November you have a crush on Jason. Besides, in your mind Paul Simon is a nerdy dud. It will be another year until you really fall in love with the song “You Can Call Me Al,” again for reasons that cannot be explained.

When you’re a junior in high school you watch Kenny Rosen and Mike Obremski sing “Sounds of Silence” for a choir concert, re-igniting your interest in Art Garfunkel and that dopey Simon guy. You spend the entire summer between Junior and Senior year discovering the music of the 60s, developing a serious Bob Dylan fetish and an annoying habit of thinking every song Simon & Garfunkel wrote was about you. This leads you to scrawl the lyrics to “I am a Rock” and “The Boxer” all over you journal, the cover of which you decorated with a hundred peace signs. Eventually you will discover Paul Simon ain’t so bad, and that you really dig his greatest hits.

You’ll forget all about Paul Simon and band and Kodachrome once you leave for college because you’ll be too busy discovering Pearl Jam, the Gin Blossoms, the Spin Doctors, and beer. However, eventually you’ll take that color photography class and be subjected to hour long lectures about the pros and cons of using Kodachrome over Fuji Film. Since you are now twenty, you have decided that you need to be a tragic heroine of some sort. This silly notion will plague you for most of your twenties. For your favorite kind of reasons, the inexplicable ones, you will decide being called names in Jr. High is your big tragedy, ignoring, of course, that you’re a fat, 6’5″ virgin from an abusive home. Instead, because of your great tragedy, you will eschew shooting Kodachrome on principle and instead use the more expensive Ektachrome (Paul Simon should have wrote a song about that because calling Sister #2, whose name is Ericka, Ektachrome would have been funny), until your pocket book wins out and you begrudgingly use Kodachrome, and it is good.

In your thirties you embrace your completely psycho relationship with the word, the song, the thing — Kodachrome. You will embrace it so much that whenever you listen to Paul Simon’s “Kodachrome” which is a lot, especially that one summer you were unemployed and only listened to 70s music, you sing your own name instead of the actual words. You’re weird like that.