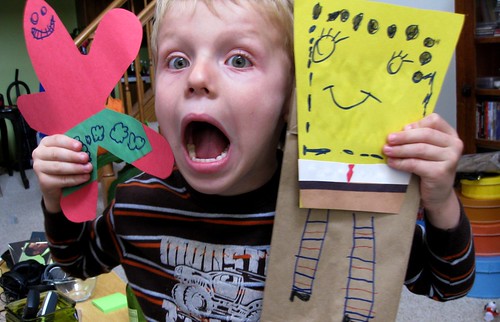 Nolan and I ran to Cub yesterday because I needed bagels. Everyone at Supergenius HQ was aghast when we went to make breakfast (apples, peanut butter, bagels) only to discover the bagel cupboard was bare! Instead we made monkey bread with magic monkey crystals, real monkeys (according to Liam), and 3 wishes each in the pan. Nolan said it tasted like magic and dreams.

After picking up bagels and cherries and peaches and apples and chocolate milk and teeny, tiny tacos (never go shopping with a five-year-old) we were forced to do battle with the Tattoo Machine of Gloom & Doom that sits outside the doors of Cub.

When we last met, the Tattoo Machine of Gloom & Doom bilked me out of $4 worth of quarters in a fruitless quest to get the scary spider tattoo. I wasn’t suckered at first. Nolan just got three tattoos, one for each of the Tibbles. As we walked to Ruby Nolan opened the cardboard folders only to discover that one of the tattoos was a giant, pink orchid thing. Oh the sobbing! The injustice! It was a tragedy.

So we went back to the Tattoo Machine of Gloom & Doom to try and get the spider tattoo. After another $2.50 we were out of quarters and spiderless.

Somehow he managed to recover from the tragedy, only to do battle again yesterday. He had earned two quarters by picking up the living room before we went to Cub. Before he inserted his money into the slots he asked the machine to please give him the spider tattoo.

“This one,” he said, pushing in the money holder with one hand, petting the sample spider tattoo with the other. “I really want the spider.”

We both held our breath as the cardboard folder popped out and he opened it.

“Oh No,” he howled. “It’s a girl tattoo!” Once again we had been foiled by the pink orchid of betrayal. Since I am only an Aunt and not a parent, I quickly gave him two more quarters to try his luck. But as I handed them over I promised myself that was it.

More rubbing, more pleading, and this time he got a Japanese looking fish thing. Not too shabby, I thought. At least it wasn’t a girl tattoo.

“No,” he cried, and I pushed our cart towards the door. “Fishes are lame.”
“Fish are not lame,” I said, walking out.
“Fish are too lame.” He stood in front of the Tattoo Machine of Gloom & Doom.
“I’m leaving,” I said standing outside the automatic doors. “Are you coming with?”
“But I wanted the spider tattoo,” he whined, hopping onto the side of the cart.”
“I know you did, Bucky.” Bucky is a nickname I gave him that is short for Bucko. Or rather, the same length as Bucko but it springs to mind quicker.
“I really like spider tattoos,” he said, dragging one foot on the ground to slow down the cart’s progress.
“Stop it,” I said.
“Maybe I should just get a permanent tattoo.”
“Did you just say permanent tattoo?” I asked. He’s five where did he learn the word permanent?
“Yeah,” he said. “A tattoo that never goes away. I should just get one of those.”
“You have to wait until you’re eighteen.”
“Why?”
“Because it’s illegal.”
“What does that mean?”
“It’s against the law to get a tattoo if you aren’t eighteen.”
“Will the cops come and arrest me?”
“Probably.”
“Oh man, that’s no fair. I really really want a spider tattoo.”
“That’s life, Bucky.”
“Life is lame.”
“I know.”